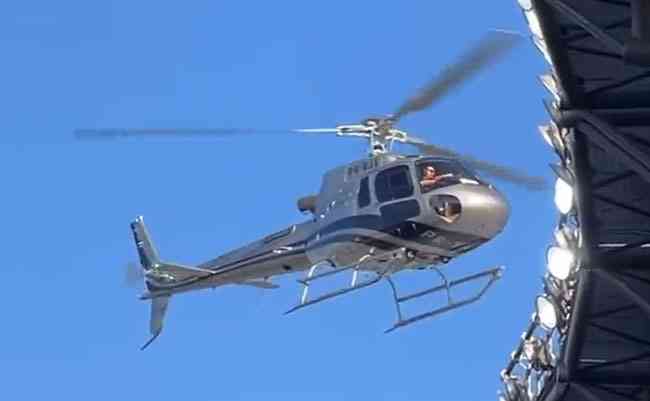 The National Civil Aviation Agency (ANAC) informed that it has started investigations into the low flight made by a helicopter of the company MHE Participaes e Empreendimentos LTDA over Mineiro during the game between Cruzeiro and Ponte Preta, on Thursday (16), by the B. The aircraft made maneuvers over the stadium’s roof and startled the fans present.

The AS 350 B3 model helicopter was manufactured in 2010 by Helibras and is registered PR-VJX.

According to the website of the National Civil Aviation Agency (ANAC), the helicopter’s Certificate of Airworthiness (CVA) expired on May 14, 2022.

According to MHE Participaes e Empreendimentos LTDA, the aircraft had been undergoing maintenance since January 2022 at the company HBR. The flight would have been carried out in the absence of the board and was entirely the pilot’s responsibility.

In a note, Anac said it would take the appropriate administrative measures.

“ANAC had access to the videos of the event and has already started investigating the case. The Agency will apply the appropriate administrative measures, which may include the issuance of a notice of infraction, the interdiction of the aircraft and the suspension of the pilot’s licenses, for example.

If those present have additional information, such as videos and photos, that may contribute to the investigation, we ask that they forward it to the official ANAC communication channel, http://www.anac.gov.br/falecomaanac.

It is also important to highlight that the airspace is regulated and inspected by the Airspace Control Department (DECEA), an Aeronautics body, and the infractions related to the airspace must be investigated by the body in question”.

Also in a note, MHE Participaes e Empreendimentos LTDA reported that the overflight over Mineiro occurred in the absence of the owners.

“MHE clarifies that said aircraft has been with the aircraft maintenance company HBR since January 2022, performing maintenance scheduled in the manufacturer’s regular schedule, and has not yet been formally returned. The act performed was carried out in absolute absence of the MHE, and it was not communicated, including the intention of the workshop and/or the aircraft crew to perform any flight on the equipment“.

Businessman had connection with Cruzeiro

MHE belongs to entrepreneurs Marcelo Tostes de Castro Maia, Edward Munson Mason II and Cristiano Richard dos Santos Machado. The latter was indicted by the Civil Police in August 2020 for involvement with the management of President Wagner Pires de S, from Cruzeiro, between 2018 and 2019.

Cristiano Richard became known for lending R$ 2 million to Cruzeiro, receiving in exchange part of the economic rights of professional players, such as David (20%), Raniel (5%), Murilo (7%) and Cac (20%). and others that passed through the base and were negotiated, such as Gabriel Brazo (20%) and Vitinho (20%). In addition, Cruzeiro entered a stake in a possible sale of the promising Estevo William, aged 12 at the time, who, according to labor laws, will only be able to sign a contract from the age of 16.

On May 27, 2019, Cristiano Richard argued that “under no circumstances was it intended to create a partnership relationship in the economic rights of an athlete, but only to insert contractual clauses and conditions that would guarantee the receipt of the loan”. The then vice president of football Itair Machado followed the same line, emphasizing, at a press conference, that the money would be used to pay taxes and salaries, and the partner of the PPE firm would be reimbursed in an installment of R$ 600 thousand and another eight for R$ 195 thousand.

Cristiano Richard’s loan to Cruzeiro was consolidated on March 1, 2018. Nineteen days later, the businessman’s son, Henrique Richard de Almeida Machado, signed a training contract with the club until March 18, 2021 and was incorporated into the sub squad. -15. After the allegations of alleged irregularities involving the name of the father and the board of directors from Cruzeiro, the teenager was instructed not to participate in training at Toca da Raposa I.

“MHE PARTICIPAES E EMPREENDIMENTOS LTDA informs, through this note, that it became aware through the press and social networks that the helicopter registered PR-VJX, owned by it, performed an overflight at the Magalhes Pinto – Mineiro stadium, during the Cruzeiro game, yesterday – June 16, 2022.

MHE clarifies that said aircraft has been with the aircraft maintenance company HBR since January 2022, performing maintenance scheduled in the manufacturer’s regular schedule, and has not yet been formally returned. The act performed was carried out in absolute absence of the MHE, and the same was not communicated, including the intention of the workshop and/or the aircraft crew to perform any flight on the equipment.