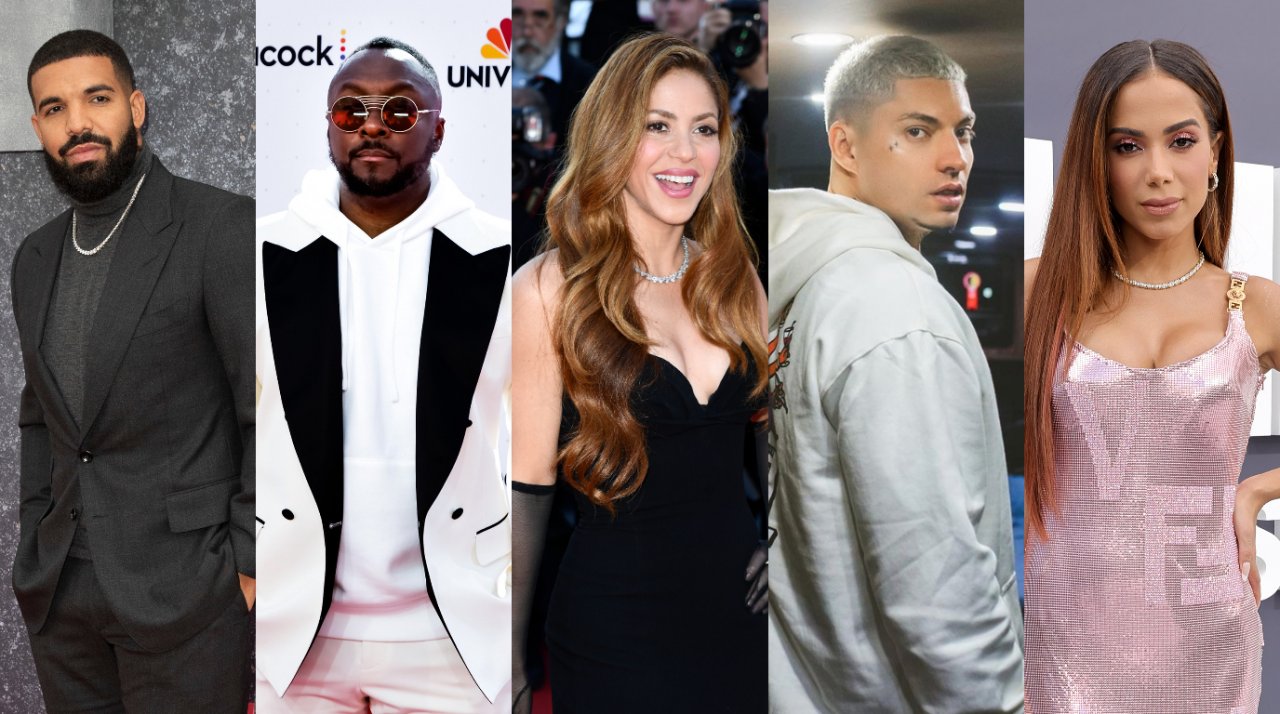 Ladies and gentlemen, fasten your seat belts because off we go to Drake’s hits again! The rapper has – by surprise – released his newest studio album! On this week’s “Lançamentos de Sexta” tram, Black Eyed Peas, Shakira and David Guetta appear with a new hit, Filipe Ret comes with his album “Lume” and Chlöe continues to rock the promotion of her solo career. Do you think it’s over? The list still has news from Zé Felipe, Alok, Chico Buarque, Måneskin, Barões da Pisadinha and much more.

What is it? A dream?! This is what we call a good surprise! In the early hours of this Friday (17), Drake released the album “Honestly, Nevermind”, with 14 unreleased tracks. The tracklist even has a feat with 21 Savage. And the other artists beware, because he’s in the area bringing one stroke after another.

The work is the first after “Certified Lover Boy”, released in September last year and nominated for ‘Best Rap Album’ at the Grammys. To top it off, the Canadian also released the video for “Falling Back”, in which he marries 23 women.

This is the kind of collaboration that couldn’t go wrong… Black Eyed Peas, Shakira and David Guetta joined forces for the hit “Don’t You Worry”, which promises to achieve the same success as “Girl Like Me”, a partnership of the group with the Colombian. With a positive message and reference to Bob Marley in the lyrics, the song had the clip recorded by all the artists in Barcelona, ​​Spain. In the super production, Shakira is an intergalactic queen, who connects with humans through dance. You don’t even have to say that the muse gave a choreography show, right?! Watch:

Completing 10 years of career, Filipe Ret released the album “Lume”, his sixth studio work. With 11 tracks, the tracklist brings together contributions from great artists such as Anitta, L7NNON and MC Hariel. But it doesn’t stop there, see?! Ret made a point of bringing to the project people who are at the beginning of their careers and looking for an opportunity to grow in the music world.

“’Lume’ has a philosophical meaning, it’s a matter of being explicit as if I’m shining light on something that should be seen. It’s trap coming with everything and funk mixing. We’re at the height of our culture because of trap music and it was amazing to work with other artists on the album. Putting Kayuá, which is starting, and also bringing funk names like Anitta and MC Poze”he told Rolling Stone.

Nothing like starting the weekend with a good old popular samba, right?! Chico Buarque presents us with “Que tal um samba?”, the song that names his next tour. Like his more traditional works, the music, in the background, brings a historical and political manifestation. The tour, which starts in September, will have the participation of Mônica Salmaso, who will perform solo numbers and duets with the singer in all presentations.

This woman goes A LOT, bug! Muse Chlöe released the song “Surprise”, which talks about taking on sexuality on your own terms. Without her sister Halle and following her solo career, the singer signs the R&B production together with Scott Storch. And of course she wasn’t going to disappoint: the song already came with a beautiful video full of sensuality. It’s the pride of godmother Beyoncé!

Put on the helmet that comes high, huh?! Zé Felipe arrives with the single “Bandido”, a track featuring MC Mari and the artist’s new focus for success on TikTok. Following the molds, the song talks about the traditional fight of a couple. While the guy swears he was at home thinking about his girlfriend, the girl has proof that he was at the club. See! With special participation of Virgínia Fonseca, influencer and wife of the singer, the clip bets on extravagant colors and looks, and of course, on the famous dances.

The forrózinho with piseiro arretado that we like! Barões da Pisadinha debut the EP “Resenha Preferida”, with three new tracks, including the single “Me Tira do Piseiro”. The project also includes a DVD, recorded in Fortaleza, with 12 songs and the participation of Mari Fernandes. “This is our third DVD and we really believe in it. It didn’t have the size of the audience that we would like, because of the protocols, but the vibe was very good. We want to do something even bigger this year, with the heat of the crowd“, said Rodrigo Barão.

If there’s a soundtrack that promises, it’s the one from the movie “Elvis“. The Italian band, contemporary rock phenomenon, sings the hit “If I Can Dream”, famous in the voice of Elvis Presley. A snippet of the song was even released as a teaser for the film’s campaign. With Doja Cat and Austin Butler on the list, the full soundtrack will be released on June 24th, while the feature hits Brazilian theaters on July 14th.

Eminem and CeeLo also appear on the official “Elvis” soundtrack with “The King and I”. As if that wasn’t enough, the song was co-produced by Eminem, along with Dr. Dre. Couldn’t go wrong, right?! In the hit, Eminem talks about rise and status. CeeLo sings excerpts inspired by the classic “Jailhouse Rock”, by Elvis Presley.

It’s the biggest we have! After announcing his concert residency in Ibiza, Alok bets on the danceable “Deep Down”, featuring British artist Ella Eyre and producer Kenny Dope. “It’s a song I’ve been working on for a long time and is, without a doubt, one of the releases I most believe in and will end up becoming the soundtrack of my season in Europe. I’m really excited because we’ve been able to bring together amazing artists and the music has a really good, upbeat, upbeat vibe.” said the DJ.

It came softly and it’s here to stay! Aretuza Lovi launches “Denguinho”, a romantic forró with lyrics inspired by the legend of the Boto-Cor-de-Rosa. With a hint of pop, Aretuza was also inspired by her own heartbreaks. The clip was recorded on Ilha do Combu, in Belém do Pará.

“’Denguinho’ is a very special track, with a cute story! It was written during the pandemic when I had several reflective moments, and remembering everything that has happened so far, not only in music. As for the clip, bringing the figure of the Boto-Cor-de-Rosa was a playful way I found to illustrate all this, in addition, of course, to valuing the culture and folklore of the North and Northeast, regions I’ve always been passionate about. . And, precisely because of that, the music carries that wonderful forró root. I’m sure people will be able to dance a lot.”said the singer.

The pagode phenomenon, Dilsinho, teamed up with Paula Fernandes, for the hit “Me teach”. Right in the broken vibe, the lyrics overflow the pain and the feeling of a breakup. “As soon as I heard the song, I already felt something different. touched me. And music is like that, right? You need to touch us. Sharing the vocals with Dilsinho was another gift! Talented and charismatic. I’m sure the song will be a big hit“, declared the country singer.

After the success of “Beg For It”, which reached the top 30 of the Billboard, mother releases their newest single, “True Romance”. Already FKA Twigs promised and delivered with the hit “Killer”, written in partnership with Jimmy Napes, Amanda Ghost and Jonny Coffer. camille and Alejandro Sanz joined forces for “NASA”. Australian singer-songwriter Sam Fischer is back with his first solo single of the year titled “All My Loving”. John Legend and Muni Long debut together in the delicious “Honey”. Already Chris Brown and Wizkid bet on the hit “Call me Everyday”.

the union of melody and Zaac resulted in the single “Bandida”, which was accompanied by a video clip full of references to the series “Lucifer”, a hit on Netflix. MC Hariel talks about achievements, maturation, growth and focus on “The End is Sad”. Dennis called Star Breeze for “Motinha”. Afrobeat and funk carioca are the bet of the partnership between Rennan da Penha, puterrier, Rare and Pedro Bala. Zé Vaqueiro, the original, chose the song “Coisas do Interior” to win a special clip that reflects his own story. The group Black race released the second volume of “O Mundo Canta Raça Negra”, with eight tracks.

Karin Hils took another step in his solo career, with the single “Alô”. Already Erico Brás transits through reggae, samba, MPB and northeastern musical genres in “Sincérico Brasileiro”, his first album. Tim Bernardes shows his pop side in the project “Mil Coisas Invisíveis”. Lucy Alves launches the audiovisual of the album “Perigosíssima”, recorded in Rio de Janeiro. Gabriel Gonti and hotel reflect on self-love in “Me and Myself”. Tays Reis joined with deny jha to “Do As I Tell You”. the duo Diego and Victor Hugo shared the first tracks of “Ao Vivo em São Paulo” with the public.