WHO announces unified response against the disease

The World Health Organization (WHO) announced today (18) that it will delete from its statistics the distinction between endemic and non-endemic countries regarding the monkeypox virus, known as monkeypox. According to the organization, the measure is intended to facilitate a unified response to the virus.

“We are removing the distinction between endemic and non-endemic countries, reporting on countries together whenever possible, to reflect the unified response needed,” reads the statement posted on Saturday on the WHO website.

Before the disease spread to several countries, monkeypox was considered endemic (which circulates throughout the year in a country, with an expected volume of cases and deaths) in Central and West African countries. But in recent months there have been reports of the disease in several other non-endemic countries, especially in Europe, which already accounts for 84% of reported cases, according to the WHO.

This year alone, between January 1 and June 15, the agency said, 2,103 confirmed cases of monkeypox were reported in 42 countries, as well as one probable case and one death. The WHO, however, considers the number of cases to be even higher. “It is likely that the actual number of cases remains underestimated. This may be in part due to the lack of early clinical recognition of an infectious disease thought to occur primarily in West and Central Africa, a non-severe clinical presentation for most cases, limited surveillance and lack of widely available diagnostics,” the organization said.

Smallpox caused by the hMPXV virus (Human Monkeypox Virus) causes a milder disease than smallpox smallpox, which was eradicated in the 1980s. There are two endemic strains of monkeypox circulating on the planet today. The strain endemic in West Africa, which has a case fatality rate of 1% to 3%, is the one that has been responsible for the current outbreak in other countries. The other strain of monkeypox also endemic in some African countries, originating in Congo, is considered more dangerous with a case fatality rate of up to 10%, according to the WHO.

For the time being, the WHO assesses the disease as a moderate risk, as it is the first time that outbreaks of contagion have occurred in non-endemic countries, which are very distant from each other. On June 23, the organization is due to meet to assess whether the current outbreak represents a “public health emergency of international importance”, Tedros Adhanom Ghebreyesus, director-general of the WHO, wrote on his social network. The new coronavirus pandemic, for example, was declared a public health emergency of international concern by the WHO in January 2020.

Monkeypox is a rare viral disease transmitted by close contact with an infected person with skin lesions. Contact can be through hugs, kisses, massages or sexual intercourse. The disease is also transmitted by respiratory secretions and by contact with objects, fabrics (clothes, bedding or towels) and surfaces used by the patient.

There is no specific treatment, but the clinical pictures are usually mild, requiring care and observation of the lesions. The greatest risk of worsening occurs, in general, for immunosuppressed people with HIV/AIDS, leukemia, lymphoma, metastasis, transplant recipients, people with autoimmune diseases, pregnant women, lactating women and children under 8 years of age.

The first symptoms may be fever, headache, muscle and back pain, swollen lymph nodes, chills or tiredness. One to three days after the onset of symptoms, people develop skin lesions, usually on the mouth, feet, chest, face, and/or genital areas.

For prevention, close contact with the sick person should be avoided until all wounds have healed, as well as any material that has been used by the infected. It is also important to wash your hands, washing them with soap and water or using alcohol gel. 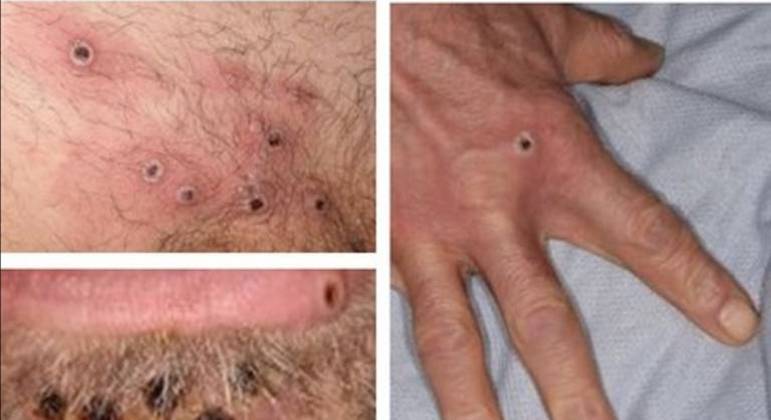