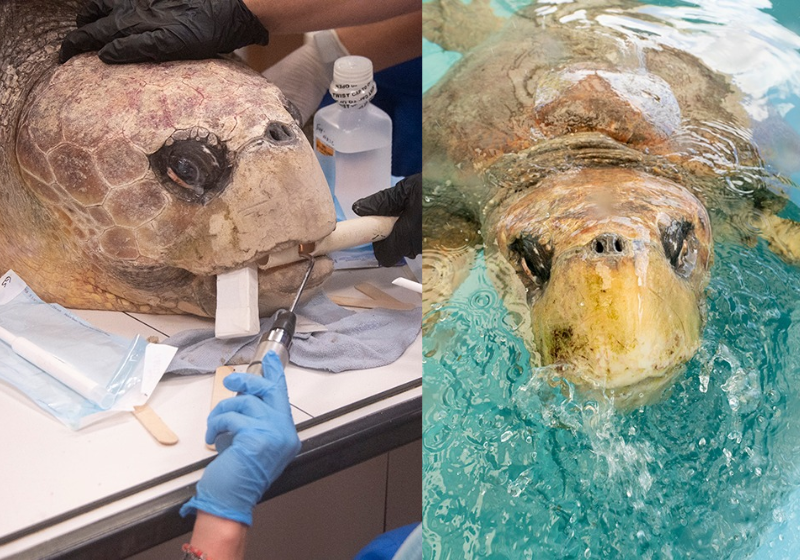 Team saves life of pregnant turtle that was bitten by sharks

The team of veterinarians at the Miami Zoo in the United States saved the life of a very special patient: a pregnant turtle, who was injured after shark attacks.

The animal received all the medical support it needed to heal its wounds, was fed with all the necessary nutrients and even got a tank to swim a lot.

Thanks to the team’s help, the turtle managed to lay more than a hundred eggs. It is estimated that the animal is 50 years old and weighs 176 kilograms.

Baymax, as the turtle was named, was found by workers at a power plant.

She had a very serious injury to her left frontal fin after being bitten by a shark.

The animal also had marks on its carapace, which probably appeared during the attack.

After medical evaluation, veterinarians at the Miami Zoo discovered that Baymax was pregnant and would therefore need even more special care.

According to the zoo’s statement, the turtle received a special diet based on “liquids, vitamins and foods that included squid and crabs”.

Baymax was placed in a treatment tank, where she managed to stabilize her body thanks to professional care and nutrition. They then gave her calcium and oxytocin to stimulate the laying process.

After receiving help with the treatment, Baymax was finally able to lay over a hundred eggs. Zoo staff prepared a tank especially for this moment and filled the container with sand to resemble the natural process, as the turtles bury their eggs.

The professionals took the eggs very carefully so that the Miami-Dade County Parks Sea Turtle Conservation Program team took them to an artificial nest for hatching. “There is hope that some of the eggs will be fertile and will hatch successfully,” the zoo said on Facebook.

Likewise, the team was happy to have helped the turtle. “Thanks to her care at Zoo Miami, she had her best chance at survival and is expected to overcome these challenges and return to the wild soon!” the zoo’s post concluded.

The turtle received all the necessary care – Photo: Miami Zoo

The zoo staff did everything they could to get her to recover – Photo: Miami Zoo