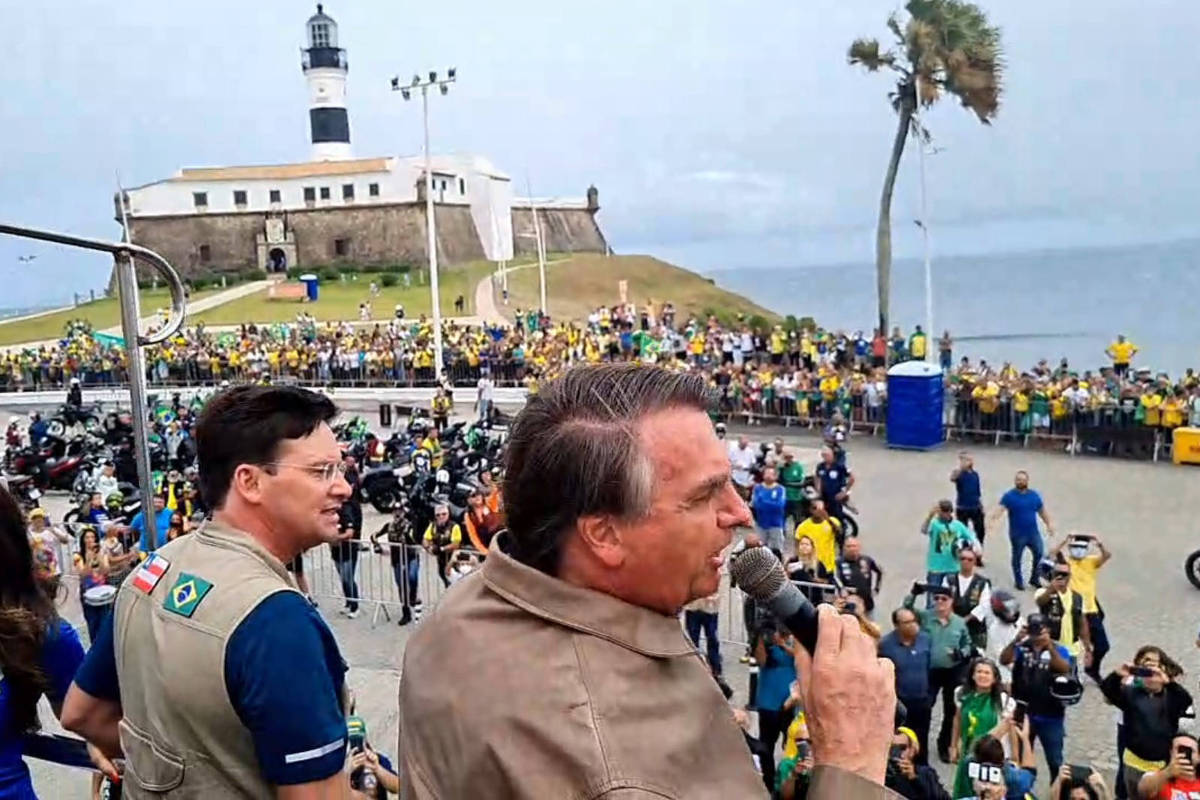 President Jair Bolsonaro (PL) avoided a possible meeting with former president Luiz Inácio Lula da Silva (PT), missed the civic procession for the Independence of Bahia and joined supporters on a motorcycle through the streets of Salvador this Saturday (2).

The presence of four presidential candidates in the Bahian capital –Ciro Gomes (PDT) and Simone Tebet (MDB) are also taking part in the civic procession through the streets of Salvador’s Old Town– is the first major test of the presidential campaign, with militants on the streets and additional concern for the security.

In his speech, the president criticized the governors of the nine states in the Northeast and promised that Brazil will have one of the cheapest fuels in the world.

“I regret that the nine governors of the Northeast have taken legal action against the reduction of gasoline taxes. This is unacceptable. […] Let’s believe that the courts will not win the case for these people and we will have one of the cheapest fuels in the world,” he said.

The rise in fuel prices had been worrying the government since the beginning of the year, and is seen by the president’s surroundings as one of the main obstacles to his reelection.

The price began to fall at gas station pumps in recent days, because a law came into force that creates a ceiling for ICMS on these items – one of the measures presented by Bolsonaro. Governors of 11 states and the Federal District, however, triggered the STF (Federal Supreme Court) against the measure.

According to a survey released by the ANP (National Agency for Petroleum, Natural Gas and Biofuels), on Friday (1), the average price of regular gasoline in Brazil dropped 3.6% this week.

In June, the Global Petrol Prices ranking showed that Brazil has the 83rd most expensive gasoline in the world, among 170 countries. The price of a liter was 15% above the average in these countries.

After the motorcycle rider, Bolsonaro spoke again to supporters. “You can be sure that the price here will also go down. Because the law is federal. Governor will have to comply”, he said, referring to the Bahian Executive Chief, Rui Costa (PT). The PT was the target of screams from the audience as well.

In his speeches in Bahia, the president also mentioned the date of Independence of Bahia and made a defense of freedom in a reference to the elections.

“What is at stake this year is the well-being and freedom of each one of us. I am sure that, if necessary, we will do everything to ensure that our Constitution, our democracy, and our freedom are preserved.”

Although he chose governors, especially opposition ones, as a target in his speech, Bolsonaro did not directly quote any, not even former president Lula, who was just a few kilometers away in the Bahian capital.

In Bolsonarista acts, before and after the motorcycle, people wore the colors green and yellow. Vendors sold Brazilian flags and President T-shirts. Bolsonaro stickers with João Roma were also being distributed.

A supporter of the president took to Farol da Barra a plaque with the name “Soldier Wesley street”, in reference to military police officer Wesley Soares, killed in March this year in Farol da Barra, the same region of the acts carried out this Tuesday.

At the time, the soldier spent four hours firing shots into the air, shouting slogans, and was shot after firing a rifle at police officers who were negotiating his surrender. Since then, he has been treated as a kind of martyr by bolsonaristas groups.

The businessman who brought the sign was wearing a black uniform, toy guns and his face painted green and yellow. he told the Sheet that he did not know the soldier, but that he was “executed for speaking out against communism”.

At the motorcyclist’s concentration, on the outskirts of Farol da Barra, a man spread a towel with the image of former president Lula from the window of a building. He was cursed and booed by bolsonaristas.

Underneath the building, Brazilian flags, T-shirts and Bolsonaro caps were sold by a street vendor. She complained that the t-shirts, which cost R$40, weren’t getting much use, because people had spent a lot on the São João festivities.

Azulimar Cruz, 52, was not on a motorcycle, but accompanied the concentration in front of the beach. She praised the increase in Auxílio Brasil to R$600, approved in the PEC of billions in the Senate this week. For her, the previous amount of R$ 400 was not enough for poverty.

“Lula has a lot of support here [na Bahia] because of the social benefits, which happened in the past. I think the help [de R$600] can help the president here, for sure,” he said.

Asked also about the president’s rejection among women, she attributed it to the fact that he “has no filter” and is “very sincere”: “It is difficult to please everyone,” she added.

​The motorcycle rider’s starting point ended up being changed in the last week to avoid possible conflicts between Bolsonaristas and PT.

The act was initially scheduled to leave at 9 am in the vicinity of the Fonte Nova Arena. But the concentration was changed by the organizers to Farol da Barra after a coincidence of date and place with the event of ex-president Lula, which will take place at 10:30 am inside the stadium.

The motorcycle rider traveled 37 km to Parque dos Ventos, in the Boca do Rio neighborhood, passing through Paralela Avenue. Cars must join the path at the height of the Ondina neighborhood.

The mayor of Salvador, Bruno Reis (União Brasil), said he hoped that the traffic legislation would be complied with on the motorcycle “to avoid any type of fine”.

This time, the president wore the helmet while traveling through the streets of Salvador. At other times, Bolsonaro does not give up protective equipment in his motorcycle parades, an infraction considered very serious, subject to a fine and suspension of the right to drive.

The 2nd of July celebrates the expulsion of Portuguese troops from Salvador in 1823, almost ten months after the Independence of Brazil.

Unlike most states, where independence took place without armed struggle, in Bahia it was preceded by battles between troops allied with Portugal and troops formed by Brazilians.

The date is celebrated every year in a procession in which fanfare bands, percussion bands and folk groups participate, with the celebration of caboclo and cabocla figures, representing the emergence of the nation and remembering Brazilian miscegenation.