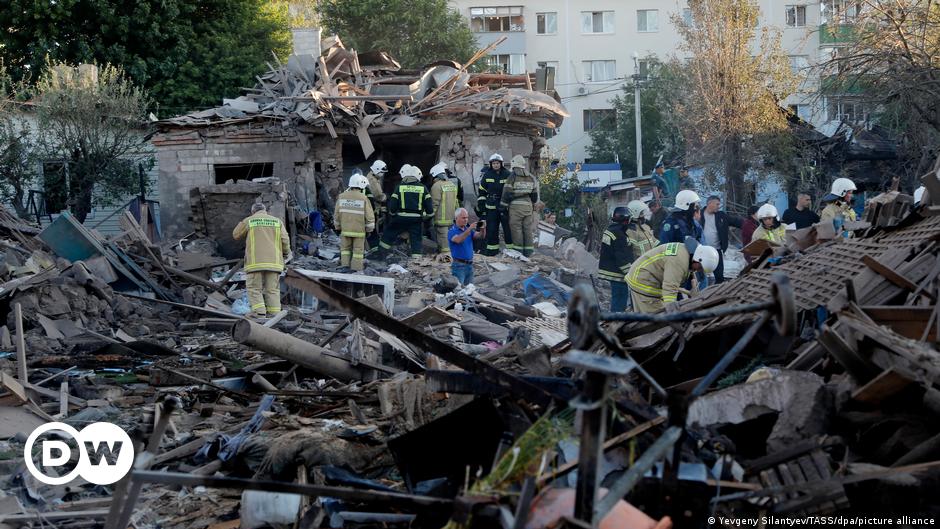 Russia on Sunday accused Ukraine of firing three missiles at the town of Belgorod, near the Ukrainian border, in attacks in which at least three people were killed and four others wounded.

“Russian anti-aircraft defenses shot down three Tochka-U cluster missiles launched by Ukrainian nationalists against Belgorod,” Russian Defense Ministry spokesman Igor Konashenkov said, adding that “after the destruction of the Ukrainian missiles, the wreckage of a of them fell on a house”.

Earlier, the governor of the region, Viacheslav Gladkov, had reported on the Telegram network that explosions were recorded in the city in the early hours of Sunday, damaging 11 residential buildings and 39 houses.

“The causes of the incident are being investigated, the air defenses have been activated,” he added, without giving further details.

Gladkov said he quickly made his way to the five blast-affected streets in the north of the city, not far from the center.

A man and a child were hospitalized, two more injured were treated at the scene, according to local officials.

Since the start of Russia’s offensive in Ukraine on February 24, the Russian government has repeatedly accused Ukrainian forces of carrying out attacks on Russian soil, especially in the Belgorod region.

In Belgorod live about 400 thousand people. The city lies about 40 kilometers north of the Ukrainian border and is the administrative center of the region of the same name.

Belarus President Alexander Lukashenko said his army had shot down missiles fired into his territory from Ukraine and promised to respond “instantly” to any enemy attack.

“We are being provoked,” Lukashenko told state news agency Belta. “I must say that about three days ago, maybe more, they tried to attack military targets in Belarus from Ukraine.

Ukraine said last week that missiles fired from Belarus had hit a border region within its territory.

Russia’s government said its forces on Sunday took control of the last major Ukrainian-held city in Lugansk province, bringing Moscow closer to its declared goal of seizing the entire Ukrainian region of Donbass.

Ukrainian fighters have spent weeks trying to defend Lysychansk and prevent it from being taken over by Russia, as neighboring Sievierodonetsk did a week ago.

An adviser to the Ukrainian president predicted Saturday night that the city could be occupied by invaders within days.

Ukrainian authorities did not immediately provide an update on the situation in the city.

A week ago, the governor of Lugansk said Russian forces were strengthening their positions in a severe battle to capture the last stronghold of resistance in the province. “The occupiers threw all their forces into Lysychansk. They attacked the city with incomprehensibly cruel tactics,” Sergei Haidai said on the messaging app Telegram.

A river separates Lysychansk from Sievierodonetsk. Oleksiy Arestovych, an adviser to the Ukrainian president, said during an online interview Saturday night that Russian forces had for the first time managed to cross the river from the north, creating a “threatening” situation.

Arestovych said the invaders had not reached the center of the city, but that the course of fighting indicated that the battle for Lysychansk would be decided by Monday.

Russian forces on Saturday stepped up their attacks on the Ukrainian city of Lysychansk, claiming to have “completely” surrounded the last Ukrainian stronghold in the Lugansk region. Ukraine denied the siege.

If Lysychansk falls, the entire Lugansk region – which together with Donetsk makes up the eastern Donbass region – could come under Russian control, marking another strategic breakthrough for Russian President Vladimir Putin.

Food maven. Unapologetic travel fanatic. MCU's fan. Infuriatingly humble creator. Award-winning pop culture ninja.
Previous Gasoline drops by R$0.20 and can be found for R$6.19 in Campo Grande; see list of posts
Next It will fall! See what the price of gasoline and diesel will look like without taxes