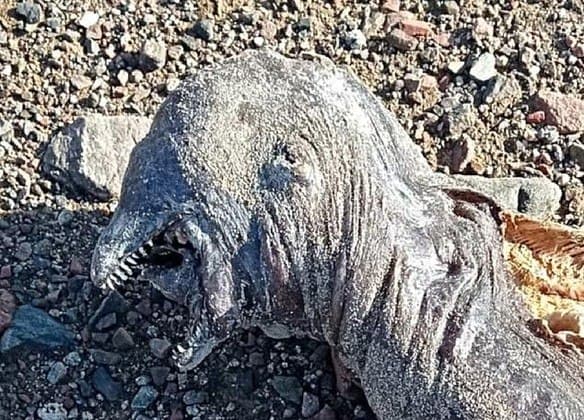 Appearances of strange animals (at least for most people) on beaches is always surprising, as we are often not used to some marine animals. However, this record taken at Gabr el-Bint beach on Egypt’s Sinai Peninsula is chilling.

Andrea Jud, 39, posted on social media a photo of the bizarre creature he found at the scene. The corpse of the twisted animal with open jaws and part of the lacerated body surprised the woman. “I didn’t touch him. Just looking at him made me uncomfortable”, she said, in an interview with the content agency Pen News.

According to the woman, the creature had no eyes and was still in a strange location, about 12 meters away from the sea. “I was camping with a bunch of friends, we had hiked to the site along the coast of Dahab. I saw him early in the morning as I was returning from the beach,” she reported.

“It looked really dead – the skin was dry and dark gray and uneven. It has a distinctive head, with an open mouth showing sharp teeth. There was an opening further back in the head where you would suspect the ears, but it could have been the gills.”

To try to unravel the mystery and discover the identity of the creature, Andrea turned to Facebook and… well, most of the answers were not very enlightening. Many netizens said it was a son of the “Loch Ness monster” while others commented that it looked like an orc from “Lord of the Rings” (I think these went a little farther).

Anyway, despite the horrifying look, the creature may not be that uncommon, in fact, according to experts heard by the Mirror, the animal is the corpse of a Moray, which died a while ago and had its body disintegrated by the sun, the which caused the strange appearance.

Moray eels are animals with a snake-like body and a large jaw, they are common in the Red Sea region and are usually harmless to humans. In the end, despite the bizarre situation, the creature shouldn’t cause any further concern.