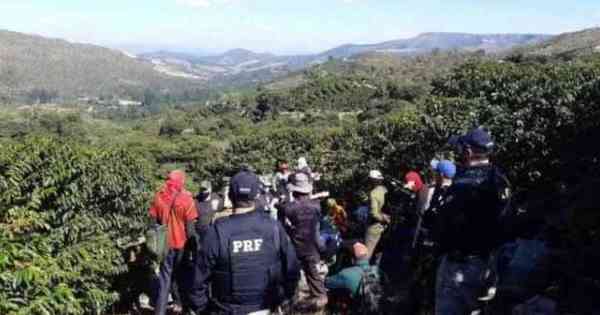 More than 300 workers are rescued from conditions analogous to slavery

In less than a month, Operação Resgate removed 337 people from conditions similar to slavery in Brazil. The results of the operation were presented this Thursday (7/28), at a press conference. Rescues began on the 4th of July, and the operation is still ongoing.

Workers were rescued in 16 states. Most were in Gois and Minas Gerais, the two states add up to 170 rescues. There were 78 rescues in Minas Gerais, 19 in So Paulo, nine in Mato Grosso do Sul, 25 in Bahia, one in Par, 26 in Rio Grande do Sul, nine in Espírito Santo, 37 in Acre, one in Pernambuco, one in Cear, seven in Mato Grosso, 92 in Góis, three in Piau, two in Paraba and 28 in Rondnia. The main activities were coffee cultivation and cattle raising.

In all, six women were rescued from housework in five states. Five children and adolescents and four migrants of Paraguayan and Venezuelan nationalities were also rescued.

To set up work analogous to slavery, it is necessary to have degrading working conditions, exhausting working hours, forced labor or debt service. Those rescued received three installments of the special unemployment insurance for rescued workers, in the amount of one minimum wage each, and employers will have to pay the labor sums due, which add up to R$ 3.8 million.

They can still be held liable for individual and collective moral damages, administrative fines and criminal actions.

Complaints of slave-like labor can be made anonymously through the Ip System, of the Undersecretariat for Labor Inspection (SIT) in partnership with the International Labor Organization (ILO); by Dial 100; or through the website of the Public Ministry of Labor (MPT).