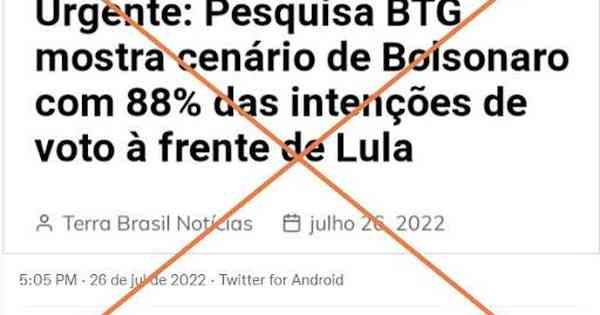 An FSB/BTG poll carried out between July 22 and 24, 2022, indicated that President Jair Bolsonaro (PL) registered 88% of voting intentions among those consulted who consider it to be ‘a good economic moment’. The figure does not refer to the responses obtained among the total number of respondents, unlike what publications on social networks since July 26, 2022 claim. According to the general results of the survey, Luiz Incio Lula da Silva (PT) presented 44% of the voting intentions for the first round of the presidential race, in the stimulated poll, and Bolsonaro, 31%.
‘I can’t lie for a long time’says one of the publications, which features a screenshot of the headline of an article on the Terra Brasil Notícias website, entitled: ‘Urgent: BTG poll shows Bolsonaro scenario with 88% of voting intentions ahead of Lula’. Similar content can be found in other messages on Twitter (1, 2) and Facebook (1, 2), which use the data to cast doubt on previous research showing Lula in the lead.

However, right in the first paragraph of the text, the author of the report details that 88% of the intentions to vote for the current president of the Republic occur in the scenario in which those surveyed say they are ‘living a good economic moment’.

A Google search for keywords ‘search’, ‘BTG’, ‘July’ and ‘president’ led to reports (1, 2, 3) on the FSB/BTG survey that reported that Lula appeared ahead of Bolsonaro in the 1st round with 44% of voting intentions, against 31% of the current president.

On the website of the FSB, the institute responsible for doing the research for BTG Pactual between July 22 and 24, 2022, it was possible to find the summary report of the document, registered on the page of the Superior Electoral Court (TSE) with identification number BR -05938/2022.

The report confirms that the scenario of 88% of voting intentions for the current president occurred only among those who consider themselves to be living ‘a good economic moment’, in a stimulated and unique response. According to the same survey, this universe corresponds to 6% of the total number of respondents.

J among respondents who said they were ‘in crisis, and with difficulty to overcome’a universe that corresponds to 60% of the total of those consulted, the former president Lula appeared in the front, with 64% of the voting intentions.

Also in this document, the institute informs that, in a scenario of spontaneous voting intention for the first round of the October 2022 elections, former president Luiz Incio Lula da Silva registered 40%. Jair Bolsonaro appeared in second place, with 30% of intentions.

In the stimulated poll – when the candidates’ options are presented -, the institute points out that Lula registered 44%, and Bolsonaro, 31% of voting intentions for the first round.