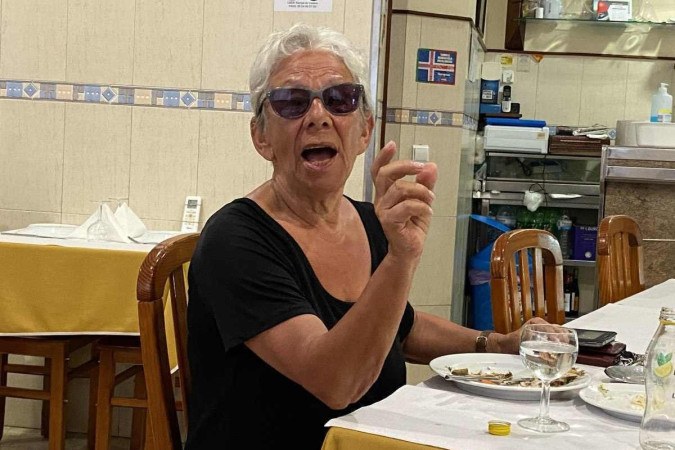 Lisbon — The European Union predicts growth of 6% for Portugal this year, but Vitorino Tomaz, 63, says “dark times” are ahead. For him, the country is combining a series of problems – the most latent of them, the skyrocketing inflation – that will make the life of the Portuguese more difficult in the coming years. “It’s just going to the streets to see what’s happening”, he stresses. “Uncontrolled price increases, economic hardship and public services collapsing,” he lists.

The most obvious sign that Portugal is derailing, points out the waiter, who was born in Alentejo but has lived for decades in Almada, on Lisbon’s south bank, comes from the Gross Domestic Product (GDP), the main measure of economic activity. After advancing 2.5% in the first three months of the year, the indicator showed a retraction of 0.2% between April and June. According to Eurostat’s calculations, the European Union’s statistics office, in addition to Portugal, only two other countries registered a contraction in the same period: Lithuania (-0.4%) and Latvia (-1.4%).

The perspective is that the second half of the year will be even tougher, regardless of the high flow of tourists that is moving the economy this summer of more than 40 degrees. Economists do not rule out a recession. Portugal will continue to deal with the well-known plague of Brazilians, inflation, which, in the 12 months ending in July, rose 9.1%, the highest in almost 30 years. The cost of living at this level undermines the income of the Portuguese, who live with one of the lowest salaries in the Euro Zone. It is not by chance that the country has lost young manpower, who, with their university degree in hand, do not think twice about seeking employment in neighboring countries.

Vitorino saw this at home. The youngest son, Diogo, graduated in molecular biology and chose to work in Austria. “It was almost three times as much money as I would have if I stayed in Portugal,” he says. The problem is that this brain drain and skilled labor does not only affect private companies, which have been recruiting employees abroad, offering previously unimaginable advantages to the Portuguese market. It hits even harder in the public sector, tied up by bureaucracy, which cannot replace and expand its staff.

A significant number of civil servants have been retiring and those who still do not have time to work to end their careers migrate to the private sector in search of better salaries. Economists point out that the high level of pensions in the public sector and the difficulty of replacing vacancies show that Portugal has not prepared itself for the future. These new retirees entered public bodies shortly after the Carnation Revolution, in 1974, which overthrew Salazar’s dictatorial regime. Those who could replace them preferred to try their luck abroad, acknowledges Sandra Utsumi, executive director of Bank Haitong.

The result of this is on the streets, in health, in immigration services, in Social Security, in security, in schools. “The quality of public services has dropped a lot, and tends to get worse,” admits Carlos Melo, 36, an insurance agent. The most dramatic situation is in hospitals, which suffer from a lack of doctors and nurses. In recent weeks, several services have been suspended, especially those of obstetrics and gynecology, aimed at pregnant women. In less than a week, two babies died due to lack of adequate care at birth. The problems, recognizes the Secretary of State for Health, Maria de Fátima Fonseca, are far from being solved, even with the government’s promise to raise the value of doctors’ overtime. “At my age, I can say that I won’t see any improvement,” says Adélia Ferraz, 81.

With fewer police officers on patrol, the feeling of insecurity is increasing on the streets. The government’s argument that Portugal is the sixth safest country on the planet no longer holds true for part of the population, which has been encouraged by Chega, the far-right party, which owns the third bench in parliament. To try to alleviate the situation, municipalities such as Lisbon and Porto chose to close police stations at certain times and move police officers from the bureaucracy to the streets — a week ago, Brazilian Jefferson Terra Pinto, 33, was beaten to death at the door. of a show house in the Portuguese capital.

As far as the police are concerned, the situation will remain tense. Representatives of the category have made public demonstrations advocating a general strike. The government promises to reinforce the cadres of the police, through competitions, and to increase salaries. But few believe the promises. Among teachers, discontent is no less. The threat, even, is of stoppage as soon as classes return after the summer vacation. “What we see in the public sector are structural problems”, recognizes economist Franquelim Alves, a visiting professor at the Catholic University of Portugal.

Large cities also suffer from deficiencies in garbage collection. Waste accumulates, especially in the most touristy areas. Merchants complain about the dirt and lack of security in these locations. Revenue from foreign visitors is vital to the country’s economy. The problem is that they end up sanctioning soaring prices, which will be fought with higher interest rates, as the European Central Bank (ECB) warned, which raised the basic cost of money by 0.5 percentage point, the first increase since 2011.

The President of the Republic, Marcelo Rebelo de Souza, has asked for patience and resilience from the population, which still sees part of the country burning because of fires that could, in large part, be avoided. But it is difficult to respond to this appeal, recognizes the retired Adélia Ferraz. Insurance agent Carlos Lopes expresses this discontent well: “We are paying for the mistakes of consecutive governments.” Brazilian Maria da Penha, 56, says that, in the two decades she has lived in Portugal, she has never seen such a complicated picture, starting with inflation. “Everything is very, very expensive”, adds she, who works as a day laborer.

The year 2023 is already seen as terrible by most Portuguese. “The effects of the war in Ukraine, which pushed up energy prices (including fuel) are just beginning,” predicts the insurance agent. Economist Franquelim Alves is not so pessimistic. “We’re not living in chaos,” he stresses. But he recognizes that Portugal has long-standing structural problems, starting with heavy public debt. In two decades, Portuguese public debt jumped from 60% to almost 130% of GDP.

In his view, the governments that followed chose to finance the growth of the economy based on indebtedness and tax increases, however, this movement is not sustained. Alves says that after the financial crisis of 2008 and 2009, when the Troika (formed by the European Commission, the ECB and the International Monetary Fund, IMF) imposed a series of budget restrictions on Portugal, public debt even fell. However, it grew again because of the pandemic of the new coronavirus, since the government was forced to use measures to help the population, especially the most needy.

Poverty, by the way, has been increasing substantially in Portugal. “I’m just not in a more complicated situation because I’m part of a government social program, which subsidizes energy tariffs — with an accumulated increase of 31% in 12 months”, says Maria da Penha. She also says that she has heard worrying reports from acquaintances who are no longer able to buy basic food items. Not even the fall in unemployment, which is at 5.9%, helped to reverse the difficult situation of families. The reason: income cannot keep up with markdowns on supermarket shelves.

The president of Banco PBI, João Pedro Oliveira e Costa, admits that the high cost of living is today, “clearly”, the most worrying issue at the moment in Portugal, and does not rule out the increase in credit default if the cost remains in the current levels. “Nobody can close the month’s accounts anymore. Salaries no longer face price increases”, reinforces the waiter Vitorino Tomaz. Official data indicate that the Food Bank, which assists the poorest, is helping 52,000 more people than before the pandemic.

The serious problems faced by Portugal should not go unnoticed by Brazilians who wish to arrive in the country, believing that the Eldorado exists. Those who already live in Portuguese territory have an exact idea of ​​what it is like to live outside Brazil and in a place where the average income no longer pays a basic rent. The minimum wage is 705 euros (about R$4,000) and the lease of a one-bedroom apartment, depending on the Lisbon area, is around 900 euros (R$5,100). Those who cannot afford the rent alone, submit themselves to sharing the house with up to six people – in some cases, there is alternation of beds.

Casa do Brasil, based in Lisbon, has been working to demystify the view that Portugal is a land of opportunity, especially in the face of widespread news that there are plenty of jobs in the country. There are indeed vacancies, but what is paid for the work provided often does not even cover the necessary expenses with housing and food. Diarist Maria da Penha says: “At home, there are no problems because my husband, I and my two youngest children work. We share all the expenses. Without that, the problems would be great”.