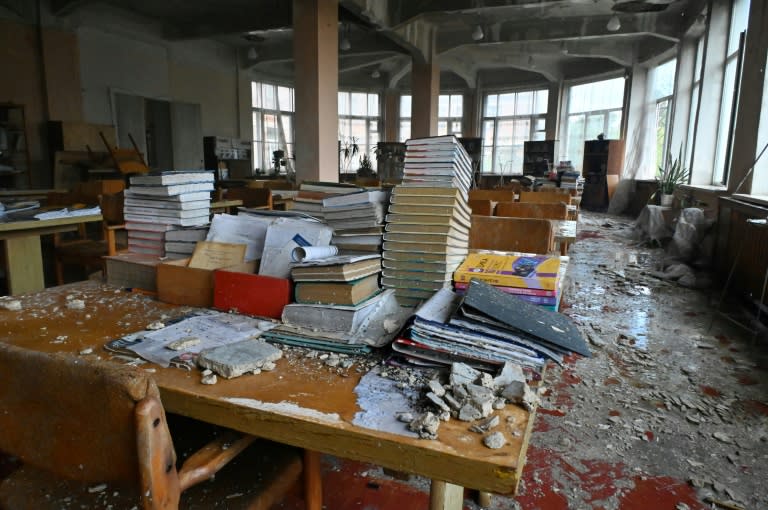 Russia said on Sunday that an explosive drone strike had wounded six people at the headquarters of its Black Sea fleet in annexed Crimea, while authorities in the southern Ukrainian town of Mykolaiv said they were facing the worst air strikes. violent since the beginning of the war.

Sevastopol Governor Mikhail Razvojayev posted on his Telegram account the following message: “This morning, Ukrainian nationalists decided to spoil the Russian Fleet Day”, which is celebrated in Russia this Sunday.

He explained that a drone had landed in the yard and reported six injuries among staff.

All Russian Fleet Day festivities “have been canceled for security reasons”, Razvojayev said, urging Sevastopol residents not to leave their homes “if possible”.

Ukrainian officials, however, have denied being behind this unprecedented attack, describing the Russian accusations as “deliberate provocation”.

The announcement of an “alleged Ukrainian attack on the Russian fleet’s headquarters in Sevastopol” is “a deliberate provocation,” Serguii Bratchuk, a spokesman for the Odessa (southern Ukraine) regional administration, said in a video on Telegram.

“The liberation of occupied Ukrainian Crimea will take place in a much more efficient way,” he added.

During a speech in St Petersburg (northeast Russia), President Vladimir Putin announced that his Navy would be equipped “in the coming months” with a new hypersonic Zircon cruise missile, which “knows no obstacles”.

The Russian fleet “is capable of inflicting a devastating response on all those who decide to attack our sovereignty and freedom”, Putin assured, noting that its military equipment “is subject to continuous improvement”.

Delivery of the Zircon missiles “to the Russian Armed Forces will begin in the next few months,” he said.

In southern Ukraine, authorities in Mykolaiv said on Sunday that the city had been the target of intense Russian bombing, probably “the heaviest” since the beginning of the war, which left at least two dead.

According to the city’s mayor, Oleksandre Senkevych, “powerful explosions” were heard twice this morning.

The governor of the region, Vitali Kim, reported two deaths, a civilian couple.

Other attacks hit the regions of Kharkiv (east) and Sumy (northeast).

On Saturday night, Ukrainian President Volodymyr Zelensky urged residents of the Donetsk region to leave the region to escape “Russian terror” and bombings in this territory in the east of the country, largely under Moscow’s control.

“A government decision has been taken on the mandatory evacuation of the Donetsk region,” Zelensky said in a video.

“The more residents who leave the Donetsk region now, the fewer people the Russian army will kill,” he added.

Ukrainian Deputy Prime Minister Iryna Vereshchuk had already announced the compulsory evacuation of the population of Donetsk, one of the two administrative regions of the Donbass industrial basin where Russia is gaining ground.

She justified the decision by the destruction of the gas network and the absence of heating in the next winter in the region.

At least 200,000 civilians still live in territories in the Donetsk region that are not yet under Russian occupation, according to an estimate by Ukrainian authorities.

On Friday, the bombing of a site in Olenivka – territory occupied by the Russians in the Donetsk region – and used as a prison for captured Ukrainian soldiers, left around fifty dead.

A “deliberate Russian war crime”, according to Zelensky.

Ukrainian human rights official Dmytro Lubinetsk announced on Saturday that he had asked the Red Cross and the United Nations Human Rights Monitoring Mission, which in May oversaw the negotiated surrender with the Russians of the defenders of the Azovstal factory in Mariupol ( southeast), to go to Olenivka.

After long weeks of siege and resistance at the steel mill, around 2,500 Ukrainian fighters surrendered and Moscow made it known that they would be arrested in Olenivka.

“When the defenders of Azovstal left the factory, the UN and the ICRC acted as guarantors for the lives and health of our soldiers,” Zelensky said late on Friday, urging the UN and the Red Cross to “react”.

Russia accused Ukrainian forces, which it rejected, saying that Moscow or the separatists were trying to “cover up the torture of prisoners and the executions carried out” there.

According to Dmytro Lubinetsk, based on the analysis of Russian images, “the explosion took place from inside” the prison and not after a bombing.