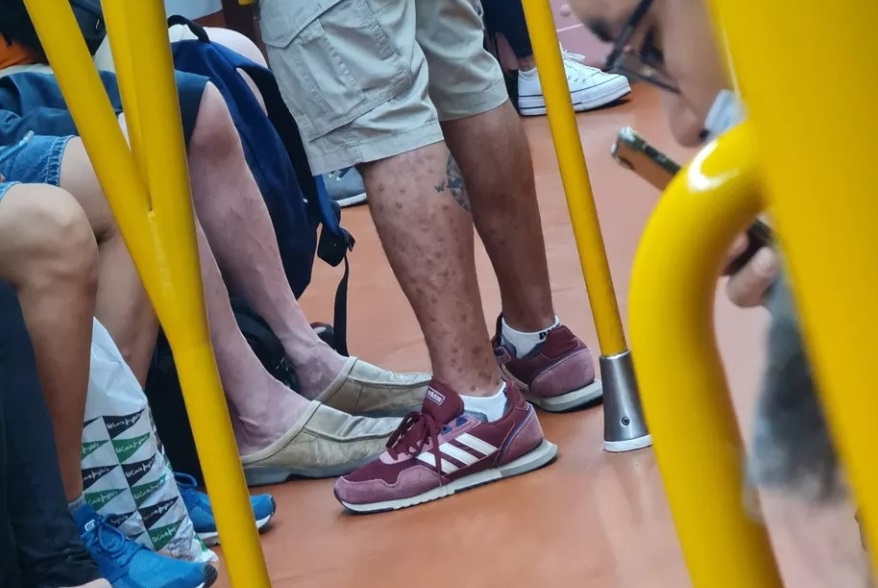 Doctor raises alarm after catching man with monkeypox on subway

A photo taken of a man who appears to have monkeypox in the Madrid metro, Spain, has gone viral after a doctor posted it on his Twitter profile as a warning.

Arturo Henriques says that no one in the subway car seemed to care about the presence of the infected passenger and he then decided to approach the man. He questioned whether the lesions on his legs were from monkeypox and received a positive response.

According to Henriques, the man said he had not received guidance from his doctor to stay at home, just wear a mask.

The doctor then warned him about the danger that his injuries to his body posed to others.

“I tell him that the injuries he has on his body are the most contagious. That I am a doctor and that possibly he did not understand all the indications of his family doctor,” he wrote.

According to him, the passenger ignored his directions and sat down. The doctor even tried to approach a woman next to the man, asking if she wasn’t worried about contaminating herself. She then replied, “How am I going to fear if I’m not gay? The government said it was the gays who had to take care of themselves.”

The doctor said he was concerned about the number of people the man may have infected. “I have no idea,” he said. “But now, when I take the subway, I try to keep my balance all the time, not to touch anything, let alone sit.”

How is the transmission?

Monkeypox virus is transmitted by close contact with lesions, body fluids, respiratory droplets. This includes having physical contact and being face-to-face with the infected person, which can happen on the subway. Transmission can also happen from contact with contaminated materials, bedding.

It is not yet clear whether monkeypox can be transmitted sexually, through semen or through vaginal fluids. Studies are needed to better understand this risk.

Credit: CDCEnlarged image shows a blackberry-like Monkeypox virus particle, which was found in the fluid of a rash.

However, the fact that most infected people in the world are men who have sex with men, the World Health Organization (WHO) has already emphasized that anyone is subject to the virus, regardless of sexual orientation.

The incubation period of the virus (time from exposure to the appearance of the first symptoms) is usually six to 13 days, but can range from five to 21 days.

The World Health Organization (WHO) noted that the vast majority of cases have presented with a rash, in addition to fever, fatigue, muscle aches, vomiting, diarrhea, chills, sore throat or headache.

But the US Centers for Disease Control and Prevention (CDC) draws attention to a different presentation of the disease in recent cases.

Before, these lesions appeared spread throughout the body and in large numbers, now this has not happened in all cases. Instead, some people diagnosed with monkeypox are showing a single spot or blister.

Other patients develop a localized rash, often around the genitals or anus, before experiencing any flu-like symptoms. “And some didn’t even develop these flu-like symptoms,” Centers for Disease Control and Prevention (CDC) director Rochelle Walensky said in a press release.

According to the CDC, many also did not have swollen lymph nodes, which is a standard symptom of monkeypox.

How to protect yourself and others?

The WHO advises those who have symptoms of or have had close contact with someone with smallpox to contact a healthcare professional for advice and, if possible, isolate themselves and avoid close contact with others, particularly skin-to-skin or face-to-face. , including sexual contact.

The guide also recommends washing hands, objects and surfaces that have been touched regularly and wearing a mask if you are in close contact with someone with symptoms.