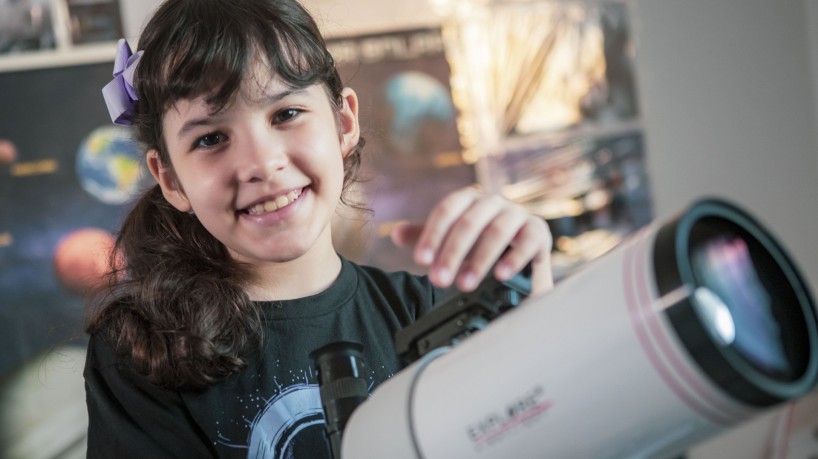 Nicolinha, a young amateur astronomer, is the only Brazilian on the list of the 100 child prodigies in the world

Abhishek Pratap 2 weeks ago News Comments Off on Nicolinha, a young amateur astronomer, is the only Brazilian on the list of the 100 child prodigies in the world 7 Views

“The youngest child amateur astronomer in the world”, this is the title that Nicole Oliveira carries, in the eyes of the scientific community, at only 9 years old. The girl from Alagoas who lives in the capital of Ceará adds recognitions ranging from a medal of honor to NASA’s merit, for the detection of 31 asteroids, to the quality seal of content from the Brazilian Society of Astronomy. The newest of Nicolinha’s countless achievements is the summons to receive the award Global Child Prodigy Awards 2022being the only Brazilian child to be included in the list of the 100 child prodigies from around the world.

The ceremony is scheduled to take place on August 20 this year, in Dubai, in the United Arab Emirates. According to the organization of the event, the Global Child Prodigy Awards is an initiative that aims to recognize, honor and encourage great talents who have unusual experience in their respective fields, such as arts, music, dance, among others.

The talent in the field of astronomy came to the attention of the organizers of the award who, upon realizing the contributions of the small to scientific productions, opened an unprecedented category among the 20 already existing. In addition to the trophy and certificate, the award will have a book with the stories of the child prodigies of the edition, which already includes it.

Thus, Nicolinha is announced to receive the award in the Astronomy category. However, some adversities occurred during the preparations for the awards, one of them was going to the event, considering the high cost of the trip.

The girl’s mother and artisan, Zilma Janacá, says that a campaign was opened to get sponsors to help her. “With the support of some mutual family friends and publicity on her social networks, the team at Alchymist Group decided to sponsor the tickets and accommodation so that Nicolinha could participate”, he said.

With the sponsorship, the girl, her parents and her mentor, Rodrigo Carvalho, will cross the Atlantic on August 18 to celebrate yet another achievement of the little prodigy. According to the mother, the predominant feeling is joy and pride in seeing her daughter taking flight towards her goals.

“Nicolinha is a happy child, who plays, is studious and an incredible daughter. Without a doubt, she is a gift in our lives. What makes me happiest is seeing her dream and encouraging other children to dream along with her. Even small, she proves that children have a lot to teach, including in science,” she declared.

Nicolinha’s knowledge is shared on her social networks, where in addition to publishing about the discoveries, she prepares classes at the study club for children who, like her, have a great admiration for astronomy.