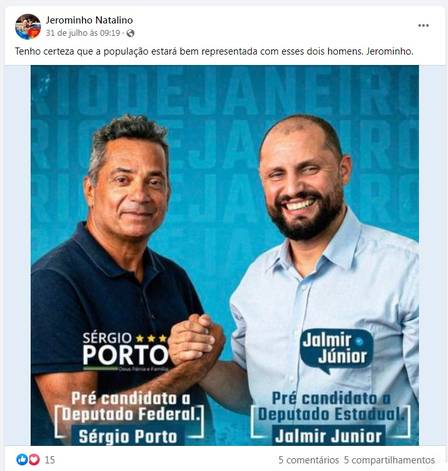 Three days before he was killed, Jerominho announced his support for the candidacy of PM colonel at an event at his home

Abhishek Pratap 1 week ago News Comments Off on Three days before he was killed, Jerominho announced his support for the candidacy of PM colonel at an event at his home 3 Views

Three days before former councilor and militia member Jerônimo Guimarães, known as Jerominho, was shot dead in front of his social center in Campo Grande, in the West Zone of Rio, he announced support for the candidacy of a PM colonel for federal deputy. During a meeting open to the public at his home, in the same neighborhood, Jerominho received the official, Sergio Amâncio da Silva Porto (PROS), and a pre-candidate for state deputy, Jalmir Junior (PRTB). Photos published on social networks by the pre-candidates show Jerominho’s house packed at the time. On the eve of the meeting, the militiaman had posted on his profile on a social network a text in support of Porto and Junior: “I’m sure the population will be well represented with these two men.”

Founder of the largest militia group in the state, Jerominho was the target of an attack in front of the social center he maintains, on Estrada Guandu do Sapê. He was taken to West D’or Hospital, but he couldn’t resist. Jerominho’s brother-in-law, identified as Mauricio Raul Atallah, who was accompanying him at the time, was also shot and taken by the Fire Department to the Rocha Faria Municipal Hospital. According to the Municipal Health Department, until last night, he was still hospitalized in serious condition.

Jerominho was shot by three hooded men armed with rifles who jumped out of a Cobalt shortly before 4 pm. Images from security cameras in the region, which have already been seized by the Civil Police, show that the action lasted 10 seconds. When he was shot, Jerominho had just left his social center, accompanied by his brother-in-law.

Earlier this year, Jerominho announced that he would be a candidate for federal deputy in the next elections. However, shortly after the announcement, the former councilor was arrested on an old-time conviction for extortion at gunpoint against van drivers, a crime committed in 2005. Less than a week later, he was released because the court found that Jerominho had already served the total sentence to which he had been sentenced. Since he was released, Jerominho did not speak about his candidacy again, until he announced support for the two pre-candidates.

After the meeting, Colonel Sérgio Porto posted on his social networks about the event. “Meeting night in Campo Grande, next to my friend and pre-candidate for state deputy Jalmir Junior. I would like to thank all the people who participated in this event, the space was totally packed. Together we can make a difference!”, he wrote. In one of the images posted by the pre-candidate himself, he appears alongside Jerominho and his brother, Natalino Guimarães, both convicted of founding the biggest militia in Rio. Porto, who was once commander of the 15th BPM (Duque de Caxias), the Road Police Battalion (BPRv) and the Environmental Police Command (CPAM), took a leave of absence from the Military Police at the beginning of last July to apply.

In 2017, Porto was even investigated by the Internal Affairs Department of the PM on suspicion of being the author of messages, in a WhatsApp group, encouraging deaths resulting from clashes with the police. On the occasion, the official shared a report on the numbers of deaths in operation in 2017, which showed that the unit commanded by Porto was in second place in the ranking of the areas that recorded the highest number of cases during the year. “Pride of the Baixada”, he commented, with bombs and coffins emoticons next to the message. The other pre-candidate who attended the meeting, Jalmir Junior, has already been twice elected councilor of São Gonçalo, in the Metropolitan Region.

Jerominho’s murder takes place in the midst of an internal war in the militia that he himself helped to found. Last year, after the death of the then head of the paramilitary group, Wellington da Silva Braga, known as Ecko, two men began to dispute the succession: Luís Antônio da Silva Braga, known as Zinho, Ecko’s brother, who took control of the militia in West Zone, and Danilo Dias Lima, aka Tandera, former right-hand man of the former boss, who today dominates regions of the Baixada Fluminense controlled by the gang. Since June of last year, both groups have been carrying out attacks to try to invade rivals’ areas and increase their territories.

Police are investigating whether the murder is linked to the militia war. However, agents investigating the group claim that Jerominho no longer had a leadership role within the group, despite his influence and political power in Campo Grande, one of the neighborhoods dominated by the militia. In all, Jerominho spent 11 years in prison on charges of leading the militia.