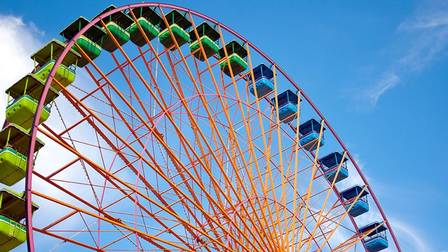 Couple arrested for having sex on amusement park Ferris wheel

One couple arrested after having sex inside an open Ferris wheel cabin in front of young amusement park visitorsaccording to police officers who detained the pair for indecent exposure.

Investigators allege that David Davis and Heather Johnston, both 32, were “observed having sex” around 8:30 pm Sunday (8/14) while riding the Wonder Wheel at Cedar Point Park in Sandusky (Ohio, USA) .

As reported by the Sandusky Police Department, four female witnesses (two of them minors) who were walking in the cabin above David and Heather reported seeing the pair having sex. the witnesses “They claimed they saw the woman’s naked ass and the man’s penis”reported the police, according to the website “Smoking Gun”, which specializes in crimes.

In addition to observing David and Heather naked, witnesses said they “they could feel the cart rocking and see both the man and woman moving back and forth”. One of the minors said that “saw the woman on all fours and saw the man behind her”.

Witnesses said that David and Heather knew they were being watched and “they started laughing and continued their behavior”. One of the young women told the police that she was “very shaken by what she witnessed” is that “That was very traumatizing for her”.

David and Heather, according to police, initially denied any wrongdoing, but later “admitted that they were involved in sexual relations” on the toy. Both said they were unaware that the two witnesses were minors.