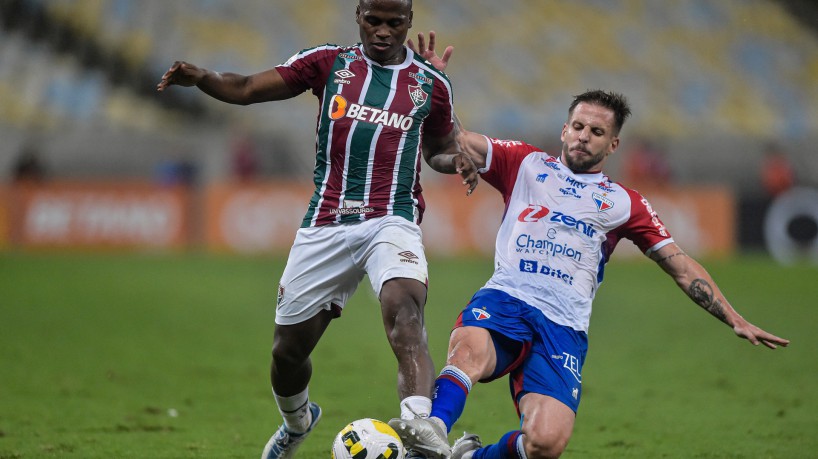 Fortaleza loses to Fluminense at Maracanã by 2-1

In a highly disputed duel, especially in the second half, and with two goals disallowed by VAR, Fortaleza ended up losing the second straight match in the return of Serie A, this time to Fluminense, at Maracanã, 2-1.

The Argentinian Cano, who had not scored in four matches, was the author of two goals for Tricolor das Laranjeiras, while Galhardo scored for Leão. Shirt 91 even scored his second in the match as well, but was invalidated. The other disallowed goal was by Zé Welison.

With the defeat, on Saturday night, 10th, Leão fell to 13th position, being overtaken by the biggest rival, Ceará, in the classification.

Closely, Fortaleza did not open the scoring before the first minute of the game. When marking a ball out from Fluminense, inside the penalty area, Zé Welison disarmed Ganso and rolled back. Sasha arrived hitting first and Fábio defended. The rebound presented itself to Galhardo, but a defender arrived playing for a corner beforehand.

Fluminense’s response came a short time later, with Matheus Martins, who passed Benevenuto, invaded the area and hit Fernando Miguel’s exit. Defender Brítez saved, clearing the ball before it crossed the line. There was a rebound and Fernando Miguel spread out.

As expected, Flu was much better with the ball and started to set the tone for the match, while Leão bet on regaining possession and on a quick counterattack. It turns out that the green and grená team no longer left the defense as unprotected as in previous encounters with Leão, for the Copa do Brasil, and that made it difficult for the Ceará people to attack. Tricolor do Pici even managed to perform tackles, but more in the defense field, to avoid the arrivals of Fluminense.

Matheus Martins was the most used player in the plays built by Tricolor das Laranjeiras, receiving passes from Ganso and Arias, but the scorer Cano opened the scoring for the hosts. At 10 minutes, he received the ball near the half-moon, with his back to the goal, turned to the left and took a risk. A deflection from Titi contributed to taking Fernando Miguel out of the play.

Unable to connect attacks when retaking the balls in the defense field, Fortaleza started to seek more tackles in the opponent’s field. That was how Moisés managed to leave with the ball under control and serve Ronald in the penalty area, on the right, but Manoel saved it; and that Galhardo was able to finish from the edge of the area, but kicked high.

That was also how Tricolor do Pici decreased, at 44. Galhardo disarmed Nino before the big circle and Zé Welison kept the ball, advanced and hit a shot from outside the area, but VAR called a foul at the beginning of the play – there was also Nino’s elbow on Galhardo — and the goal was disallowed.

On the return of the break, Vojvoda changed his strategy a little and advanced Fortaleza, putting Caio Alexandre and Pedro Rocha in the vacancies of Zé Welison and Ronald. Such posture made the match gain balance and more real chances of goal.

If in the first half it was Leão who almost scored early, in the second half Fluminense had the chance to expand with two minutes, in Samuel Xavier’s submission in the penalty area.

Pici’s Tricolor got the tie quickly. In a descent on the left, Capixaba crossed in the measure for Galhardo to complete with a header on the second post.

In the next ten minutes, two more goals. First, Fluminense jumped ahead of the score again. Under pressure from the Cariocas, Galhardo barely cleared a ball and Caio Paulista kicked it from afar, hitting the post. Fernando Miguel had jumped to try the defense and left the goal open. Cano, well positioned, took advantage of the rebound and scored his second, at 11.

Galhardo’s remission came four minutes later, when Peixinho completed a cross from Robson, from the right. The VAR again came into action and found that the assisting player was in an irregular position.

The match turned into a straight exchange. Fluminense and Fortaleza started piling up wasted chances. On the side of Ceará, one can cite a chance for Romarinho, spinning and hitting the penalty area, in addition to Capixaba, in two attempts at an Olympic goal, which Fábio saved. Despite the advances, none of the tricolors managed to score more.

Food maven. Unapologetic travel fanatic. MCU's fan. Infuriatingly humble creator. Award-winning pop culture ninja.
Previous What damage can drug use do to the heart? – 09/11/2022
Next The number of dead after the shipwreck in Belém (PA) rises to 19; still missing – News