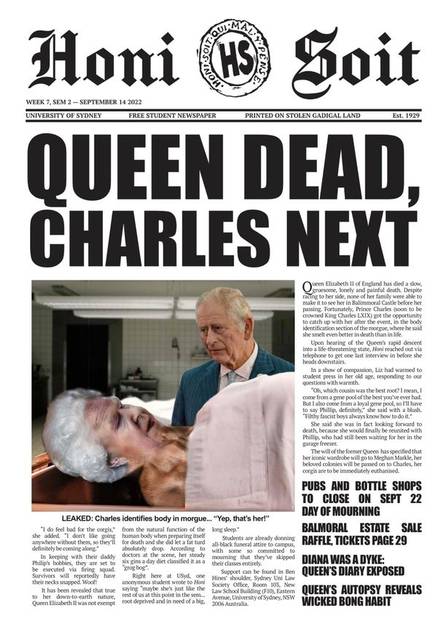 A student newspaper was heavily criticized after publishing on its front page a edited image of the late queen and king charles.

The newspaper, called “Honi Soit”, is associated with the prestigious University of Sydney (Australia).

The publication decided to print on the cover a manipulated image of Elizabeth II lying in what appears to be a morgue. The monarch died on the 8th. Reactions in Australia, a former British colony, ranged from sadness to criticism of imperialism.

King Charles III, who has taken the throne, can be seen beside her sadly in the montage.

Below the cover image was written in bold letters: “Queen dead, Charles is next”.

The “report” claims that the queen’s death had been “slow, horrible, lonely and painful”. The text joked about Charles seeing his mother’s body, with a joke saying that “she smelled even better in death than in life”.

The “Honi Soit” has a reputation for controversy. In 2013, for example, the newspaper was censored for showing multiple vaginas on the cover. The idea, the editor said, was to discuss “how inaccurate the media is when referring to the female genital organ.” After printing 4,000 copies, management was ordered to destroy them all.