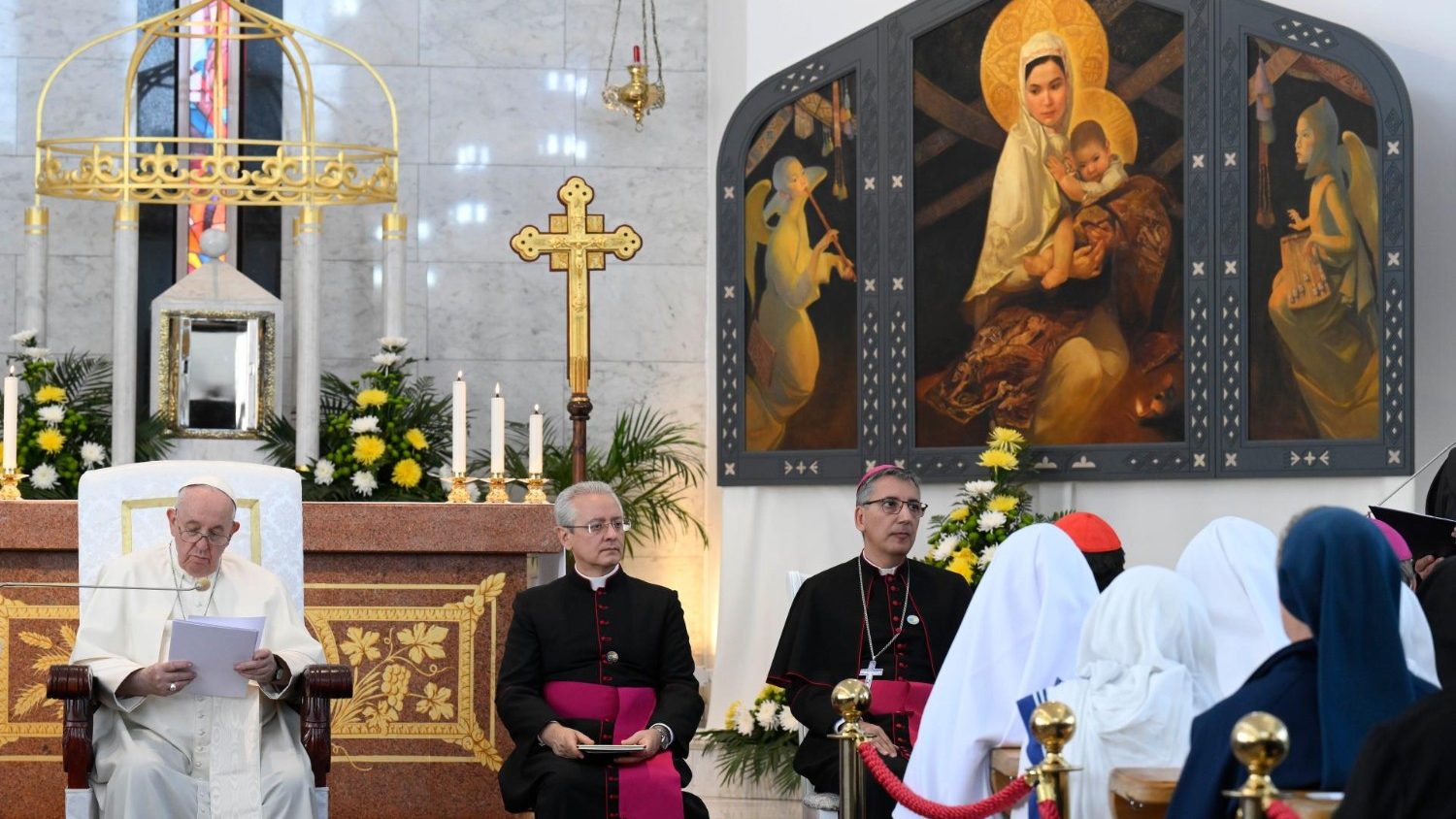 The Pope: a Church without fears and regrets, free from moralism

Abhishek Pratap 1 week ago News Comments Off on The Pope: a Church without fears and regrets, free from moralism 2 Views

In the meeting with bishops, priests, deacons, consecrated persons, seminarians and pastoral workers, the Pope encouraged to build “a Church more inhabited by the joy of the Risen One, which rejects fears and regrets, which does not allow itself to be hardened by dogmatism and moralism”. The meeting took place this Thursday morning (15) at the Cathedral Mother of God of Perpetual Help in Nur-Sultan.

On the third day of his trip to Kazakhstan, after meeting with members of the Society of Jesus, Pope Francis met bishops, priests, deacons, consecrated persons, seminarians and pastoral workers at the Cathedral Mother of God of Perpetual Help in Nur-Sultan . In his opening greeting the Pope said he was happy to meet the Episcopal Conference of Central Asia and to see a Church made up of many different faces, histories and traditions, all united by a single faith in Christ Jesus. Adding that the beauty of the Church is in this: “in being a single family, in which no one is a foreigner.

“I repeat: no one is a foreigner in the Church, we are one holy People of God, rich in so many peoples!”

“And the strength of our priestly and holy people is precisely in making diversity a richness through sharing what we are and what we have; our smallness multiplies if we share it”. says, ‘the mystery of God has been revealed to all peoples’, the Pope said: “Everyone can have access to God, because – as the Apostle explains – all peoples ‘are admitted to the same inheritance, members of the same body and partakers of the same promise in Christ Jesus through the gospel'”.

Then he said that he would like to underline two words used by São Paulo: “Heritage and promise: the legacy of the past is ours memorythe promise of the Gospel is the future of God who comes to meet us: a Church that walks in history between memory and future”.

“First of all, the memory. If today, in this vast, multicultural and multi-religious country, we can see vibrant Christian communities and a religious sense that permeates the life of the population, it is mainly due to the rich history that preceded you”. Recommending: “On the spiritual and ecclesial journey, we must not lose the memory of those who announced the faith to us, because remembering helps us to develop the spirit of contemplation of the wonders that God has wrought in history, even in the midst of the toils of life. and personal and community frailties”. However, Francis warns: “But let us be careful! It’s not about looking back with nostalgia.”

“When it turns to remembering, the Christian gaze intends to open us to amazement before the mystery of God, filling our hearts with praise and gratitude for all that the Lord has accomplished”

Without memory, there is no awe of the Mystery

“It is this living memory of Jesus that fills us with wonder – Francis continued – and makes us draw, above all, from the Eucharistic Memorial the force of love that impels us. It’s our treasure. Therefore, without memory, there is no stupefaction. If we lose the living memory, then faith, devotions and pastoral activities run the risk of fading, being like fires of straw that light up immediately but quickly go out”. Concluding his thoughts on memory, he adds: “Faith is not a beautiful exposition of things from the past, but an event that is always present, the encounter with Christ that takes place here and now in life. That is why it does not communicate only by repeating the usual things, but by transmitting the novelty of the Gospel. In this way faith remains alive and has a future”.

“And we see the second word appear here: future”. Francis continues: “the memory of the past does not close us in on ourselves, but opens us to the promise of the Gospel. Jesus assured us that he would always be with us.” “Despite our weaknesses, he never tires of being with us, building together with us the future of his and our Church”.

The Pope also speaks of the challenges of faith when he says that in a vast country like Kazakhstan one could feel “small” and inadequate. However, he encourages, “the Gospel says that being small, poor in spirit, is a beatitude, the first beatitude.” And he then states: “there is a hidden grace in the fact of constituting a small Church, a small flock; instead of showing off our strengths, our numbers, our structures and all other forms of human relevance, we let ourselves be guided by the Lord and humbly place ourselves at the side of the people”.

“Rich in nothing and poor in everything, we walk with simplicity, close to the sisters and brothers of our people, bringing the joy of the Gospel to the situations of life”

Pondering the aspect of smallness, the Pontiff also affirms: “Being small reminds us that we are not self-sufficient: that we need God, but also others, all of them: sisters and brothers of other confessions, of those who profess a religious creed different from ours, of all men and women animated with good will”.

Community open to the future of God

And he wanted the ecclesial community of Kazakhstan to always be “a community open to the future of God, scorched by the fire of the Spirit: alive, hopeful, available to the novelties of Him and the signs of the times, animated by the evangelical logic of the seed that bears fruit in the humble and fruitful love”. “In this way – the Pope continued – it opens the way not only for us, but also for others, the promise of life and blessing that God the Father pours out on us through Jesus. And it takes place whenever we live in fraternity among ourselves, when we care for the poor and those who are wounded in life, whenever we witness justice and truth in human and social relationships, saying ‘no’ to corruption and falsehood”. Also wishing that “Christian communities, in particular the Seminary, be ‘schools of sincerity’: not rigid and formal environments, but training gyms for truth, openness and sharing”. Concluding this point he further said:

“Openness, joy and sharing are the signs of the early Church; but they are also signs of the Church of the future. Let us dream and, with the grace of God, build a Church more inhabited by the joy of the Risen One, which rejects fears and regrets, which does not allow itself to be hardened by dogmatism and moralism.”