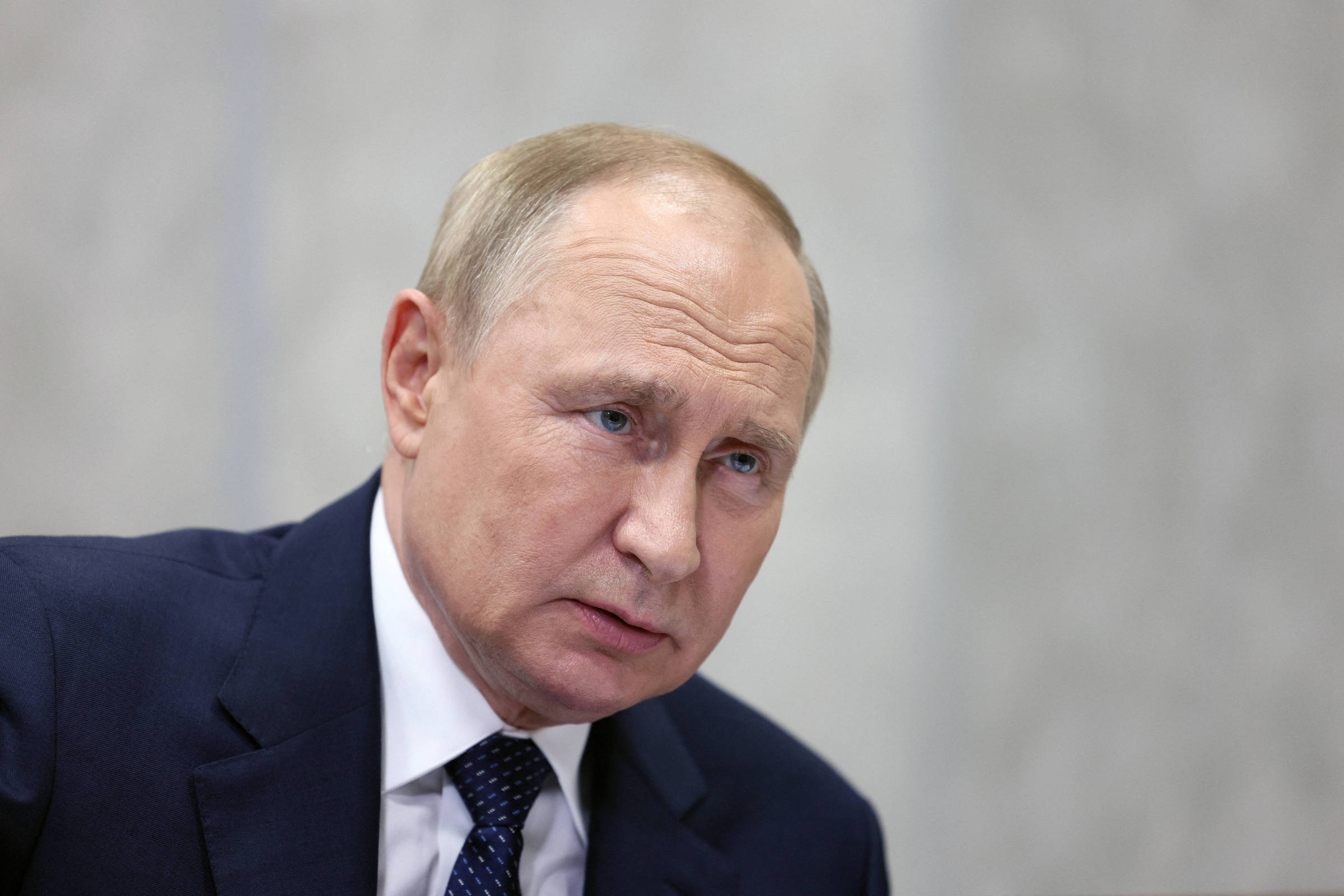 Last week was interesting to be in Europe talking to national security experts, authorities and corporate executives about Ukraine. Kiev and its allies had just forced Russian invaders into a chaotic retreat from a large swath of territory, while the leaders of China and India seemed to make it clear to Russian Vladimir Putin that the food and energy inflation his war spurred was hurting their 2 .7 billion inhabitants.

Furthermore, one of Russia’s pop stars told 3.4 million Instagram followers that the war was “turning the country into a pariah and making the lives of citizens worse”.

In short, it was the worst week for Putin since he invaded Ukraine — without wisdom, justice, mercy or a Plan B.

It could be that I was hanging out with the wrong people, but I detected an undercurrent of nervousness in many of the conversations I had with Ukraine’s European allies.

I learned a long time ago, as a correspondent, that sometimes the news is in the noise and sometimes in the silence. And my interpretation of what wasn’t being said was: yes, it’s great that Ukraine is pushing the Russians, but can you answer the question that’s been hanging in the air since the fighting started: how will this war end with a stable outcome?

We don `t know yet. In probing this question, I discerned three possible outcomes, all with complex and unpredictable side effects:

1) A total Ukrainian victory, with the risk of Putin doing something crazy when defeat and humiliation face him; 2) A dirty deal with Putin that guarantees a ceasefire and stops the destruction, but risks uniting the West and infuriating the Ukrainians; 3) A less dirty deal: we’re back to the lines where we were all before Putin’s invasion. Ukraine may be willing to accept that, and maybe even the Russians are, but Putin would have to be deposed first, because he would never accept the undeniable implication that his war was completely useless.

The variance between these results is profound, and few people will be unaffected by the direction it takes. You may not be interested in war, but it will be interested in you, in your energy and food prices, and in your humanity, as even the “neutrals” — China and India — have discovered.

No one expects the Ukrainian Army to be able to immediately follow up on its recent substantial military gains by simply pushing the rest of the Russian back. But for the first time I could hear people asking, “What if Moscow’s forces really do collapse?”

Surely a good number of Russian soldiers, thinking they would win and stay forever, are now asking themselves John Kerry’s Vietnam War question: “How do you ask a man to be the last to die for a mistake?”

Everyone can now see the big lie that was the war. Everyone hears stories that some of the reinforcements Putin is sending are convicts who traded their release from prison by agreeing to fight in Ukraine for six months. Many others are mercenaries from as far away as Syria.

Wait a minute. If Ukraine has indeed become, as Putin claimed, a state led by “Nazis” and the spearhead of a NATO plan, how could Putin not ask the Russian people to mobilize? If the cause was so just and the war so necessary, why did he have to pay criminals and mercenaries to fight and wait for the middle classes of Moscow and St. Petersburg to just shut up?

Every soldier must be thinking, “Do I stay or do I run? Who will protect me if the front falls?” Such an alliance is highly vulnerable to cascading collapse – first slowly and then quickly.

Heads up. Putin has mentioned several times that he is willing to contemplate using a nuclear weapon if Ukraine and allies begin to defeat his forces and he faces utter humiliation. I hope the CIA has a secret plan to disrupt the chain of command so no one presses the button.

I can’t imagine the Ukrainian Volodymyr Zelensky accepting a ceasefire or anything close to it now, with his forces having so much momentum. But keep that outcome in mind as winter approaches and Putin’s refusal to sell gas to Europe drives up prices to such an extent that it forces factories to close and the poor to choose between heating or food.

Even if that means Putin’s gains fall far short of his goals, he might be interested in taking advantage of this result, to at least have something to show for all his losses, avoiding total humiliation.

Many European leaders would accept this deal, even if they don’t say so. Here is how a retired statesman, on condition of not being identified, explained at a seminar I attended. Ukraine’s objective is to win; the European Union’s is to have peace, and if it comes at a price, some leaders would be willing to pay; for the US, on the other hand, it’s not the worst thing to keep the war going to weaken Russia and ensure it doesn’t have the energy for other adventures.

For this statesman, the EU is more united than before. However, in the coming months things will get tough. There will be a big divide — and the goals will become more and more different.

Even though the public statements are the same, the EU is divided on how to handle the war. Not about whether Putin is right or a threat, but about how to handle the whole situation, especially where populist reactions arise under the stress of this winter.

Some leaders will begin to ask if there is a way out through negotiations. Of course, some, like those in the Baltic countries, will support 100% Zelensky, but others will not care about the freezing of Donetsk or Lugansk, concluded the statesman.

As Michael Mandelbaum, author of “The Four Ages of American Foreign Policy,” told me, Putin can smell it and decide that his best move to salvage a shred of dignity and expose divisions in the EU is to announce that he is ready to negotiate a ceasefire and that it would resume gas shipments to Europe through an agreement. But that would require providing Zelensky with permanent and binding security guarantees — perhaps full NATO membership.

This result is dirty because it would mean that Putin got away with both murder and theft, showing that he can change Europe’s borders by force. But you’re wrong if you think that some Europeans and Republican lawmakers from Donald Trump’s Make America Great Again wouldn’t grab him if the war dragged on.

I wouldn’t rule out a 2-B either, in which Putin would bend over backwards to unilaterally take home at least a piece of Ukraine, trying to do more damage to cities he doesn’t control and getting his puppet Parliament to pass legislation to allow four regions occupied by Russia hold “referendums” on annexation.

This week’s moves appear to have two goals: to quell the panic in these regions among pro-Russian Ukrainians and to signal to Kiev, the US and the EU that Russia can still destroy the neighboring country.

This is a less dirty deal, but with the Russian people, not Putin. In this scenario, NATO and the Ukrainians propose a ceasefire based on the February 24 lines. Ukraine is spared further destruction, and the principle of inadmissibility to change borders by force is maintained. But Putin would have to admit: “We suffered 70,000 casualties, lost thousands of tanks and suffered terrible sanctions — and got nothing.”

Of course, it’s impossible to imagine him saying that. But such an agreement may be in the interests of the Russian population. So, as far as I can imagine, Putin would likely have to be ousted by mass protests or a palace coup. The blame for the war could be placed on him, and Russia could promise to be a good neighbor again if the West lifted sanctions.

Zelensky would have to give up the dream of recovering the areas taken in 2014, but Ukraine could start to heal and resume the process of joining the EU and perhaps NATO.

This has always been Putin’s war. It was never the Russian people’s war. And the population is wrong if until now they can think that they have not paid a high price for keeping silent.

When all the alleged massacres perpetrated by the Russians are documented, the Russian people will not be able to escape what was done by Putin in their name and against their name. When the fighting ceases and the world demands that Russia’s foreign reserves frozen in western banks ($300 billion) be sent to Ukraine to rebuild hospitals, bridges and schools, the Russian population will begin to understand that war was not free.

When documentary filmmakers gather all the testimonies of Ukrainian women who say they were raped by Russian soldiers, no Russian citizen will be able to travel without feeling ashamed for long.

I’m not naive. If Putin were somehow replaced by Alexei Navalni, a ceasefire with Ukraine could still be difficult to negotiate or maintain. Furthermore, repressive laws, the ruthless secret police, the lack of leaders and the legitimate fear that Putin would do to his people what he is doing to the Ukrainians all argue against his expulsion.

I am also aware that he could be replaced by someone worse, from his ultranationalist right who claims that Putin didn’t fight hard enough or was sabotaged by his generals. Or by a vacuum of power and disorder — in a country with thousands of nuclear warheads.

But consider this extraordinary example of protest, reported over the weekend by the Times: “Alla Pugatcheva, Russia’s defining pop star, has declared her opposition to the invasion of Ukraine […] writing in a post on Instagram, where he has 3.4 million followers, that Russians were dying in Ukraine for ‘illusory goals'”.

All this helps to explain the undercurrent I detected in Europe, the sense that this war could end in many ways — some better, some worse, none easy. And that’s even without the “fourth scenario”, something no one can predict.