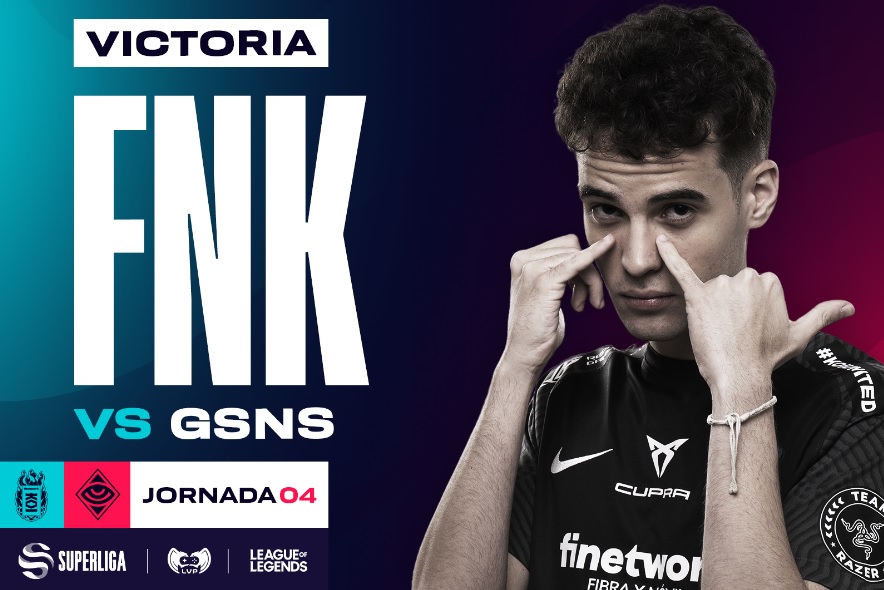 As quickly as the first week of competition passed in super league and after an intense three days of LEC, the new week of the tournament organized by the Professional Video Game League (LVP) it starts again and this fourth Day of the Regular Season of the most important LoL championship in Spain left us among so many plays, the first victory of koi, the end of the undefeated Movistar Riders, among other great moments that we will be reviewing below.

With regard to the great figures of the day we must mention Sinmivak with the constant harassment of Jax in the top lane; the great game they have had xico Y Rayito in the victory of rebels upon Movistar Riders; and the near-feat of giants in his loss to Bisons Eclub among many other highlights.

Finally after a first week more than tortuous for the tents, the squad of KOI He managed to get his first victory in super league and he does it with great superiority. Without receiving deaths on the scoreboard tents They send a message both to those fans who have criticized them during the first games and to the other teams in the category, «We are back!” Y koi is here to fight face to face for the ultimate goal: the trophy of Super League.

A perfect display in the game of tents, this afternoon and opening Day 4 of the competition, the violets they harassed a squad of jokers that little could be done before the rapid escalation of the players of KOI. This important victory means 1-3 for koi, that on Thursday they will be facing The Heretics with the aim of stretching this good pass; Secondly, jokers who still can’t get a foot in super league, this new defeat is 0-4 and the bottom of the Table of Positions.

In this second game of the day we have had the victory of rebels upon Movistar RidersThe team of David De Gea put an end to the great undefeated Horsemen. Both teams could not get great advantages, although the rebels dominated on the kill scoreboard, isma Y Movistar Riders they were the ones who were left with the neutral targets of the Rift (three dragons and a Nashor), however a great fight in favor of rebels which featured Rayito Y R4come He declared the game sentenced so that the rebels score their third win and match the Horsemen’s line with a 3-1 record.

The riders now they must turn the page as quickly as possible since on Thursday they will not only go out to Summoner’s Rift again, but they will do so before the tough squad of UCAM Tokiers; Secondly rebels will close this second week of super league measuring himself before some giants that they need to go back to that first game when they easily defeated The Heretics.

The third crossing of this Tuesday was for Bisons, the team led by Myrwn Y Random managed to extend the losing streak of a giants that it seemed that, after an error of the own bison, He returned to the game in the last minutes of the game thanks to the bonus of Baron Nashor. In this crucial instance the Poppy of Myrwn played a key role, as well as the Lucian of legolas and the Victor of Random at the time of push waves to move them away from own base.

With this victory and thanks to the previous defeat of Movistar Riders, Bisons catches on at the top of the super league with three victories and a single defeat, and now he will face jokers (last of the table) with the aim of finishing the second week of competition leading the Regular Phase of the contest; on the other hand, the giants will have a hard cross with another of the leaders, in this case it will be the turn of rebels to face the team from Malaga.

In the final stretch of this Matchday 4, Barcelona eSports took it upon himself to ruin The Heretics not only the start of the new week of competition, but also the opportunity for the heretics can climb to the top of the super league With Riders, Rebels Y Bisons. Instead it was the Catalan team who achieved the third victory to enter the top pack. With a sajator (Ryze) In MVP mode, Barça managed to defeat Los Heretics to win a great victory.

Despite the defeat, the heretics they can still come back the week if they beat KOI in the fourth game next Thursday; in the run-up to this match, the catalans will face Fnatic TQ with the aim of staying at the top of the classification of this exciting start of the Super League.

At the close of the day, Fnatic TQ took an exciting and close victory for home over UCAM Tokiersthe Murcians have given battle, however the advantage that already existed in match ups such as the bot lane or the jungle made victory inevitable for the team led by a rabble that he was chosen as the most valuable player of the game with a score of 3/3/15; four dragons and the only Baron Nashor in the game. But Rabble did not carry the victory alone FnaticTQ, the bottom lane had a spectacular game, beans (Varus) Y Advent (Braum) They left their direct rivals far behind and finished with a KDA of 8/0/9 and 0/2/18 respectively.

With this victory, FnaticTQ continues to climb positions and, with a 2-2 record, they are located in the same step of The Heretics Y UCAM Tokiers; On the other hand, the Murcians continue to make a mistake in super league, accumulate two consecutive defeats and will seek against barca get back to that high level of play that gave him the first two wins in Week 1 of the competition.

Previous For this reason Minecraft will not accept NFTs
Next League of Legends source code has been leaked due to a huge hack at Riot Games, and these will be the consequences – League of Legends