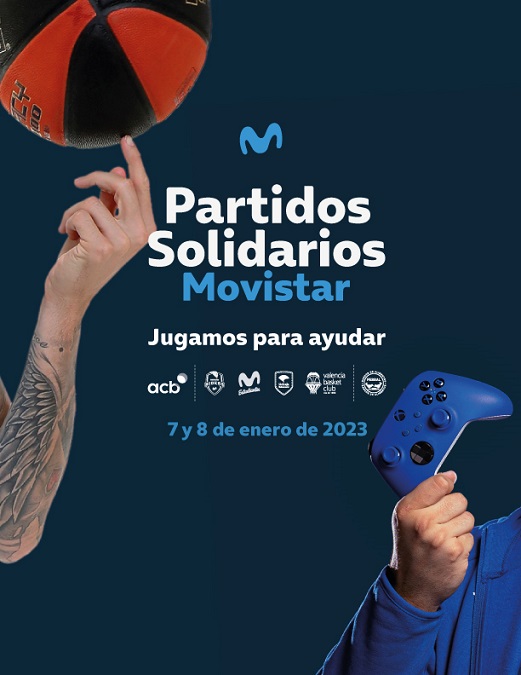 Movistar promotes one more year the most supportive basketball day

Madrid, January 4, 2022.- This weekend the fourth edition of the ‘Partidos Solidarios Movistar’ will take place, an initiative that combines sport and solidarity. On this occasion, Movistar, together with its sponsors acb, Movistar Riders and the women’s teams of the Movistar Estudiantes, Unicaja and Valencia Basket clubs, will collect kilos of food in favor of FESBAL (Spanish Federation of Food Banks) to help the most people in need.

With the celebration of the ‘Movistar Solidarity Matches’, the points will be more important than ever: the more the stars of the acb clubs and the women’s teams score in their respective leagues and the more rounds and goals the representatives of Movistar Riders score, the more kilos of food will be donated to those most in need.

The amounts collected in the nine Endesa League matches will be joined in this action by the women’s teams of the clubs sponsored by Movistar, Valencia Basket, Unicaja Baloncesto and Movistar Estudiantes, who play that same weekend and whose matches will have the same donation for converted point, and the Movistar Riders eSports team.

In his case, Movistar will donate €20 per Counter Strike game played in his clan on the FACEIT platform, and €75 for each goal scored by the riders Andoni and Tuga in the FIFA World Cup qualifier.

Fans will also be able to collaborate from home, donating through the website https://donaciones.fesbal.org/op-kilo/movistarpartidos-solidarios2023, by credit card and transfer and by Bizum 00090.

And so that no one is left without helping, it will also be possible to participate through Social Networks: @movistar_es will enable donations on Twitter, contributing €1 for each retweet to a charity publication, with a maximum of €5,000. The proceeds from this solidarity weekend will be converted into food (1 kilo of food = 1.1 euros) with which to help those most in need through the Spanish Federation of Food Banks (FESBAL).

With this new edition of the “Movistar Solidarity Parties” continuity is given to the action that took place with solidarity days in the 2019-2020, 2020-21 and 2021-22 seasons. In December 2020, 24,494 euros were raised, which became food for the Food Bank, while last year, 35,389 euros were raised, which supported those affected by the eruption of the La Palma volcano.

FESBAL is a non-profit organization founded in 1996 that fights against hunger and poverty through the use of food in perfect conditions for consumption: the Federation is made up of 54 Food Banks that are in charge of storing, classifying and distributing the food between authorized charities. These entities are in charge of delivering food to the most disadvantaged people. In the year 2021, 173 million KG of food were distributed to 1.35 million final beneficiaries.