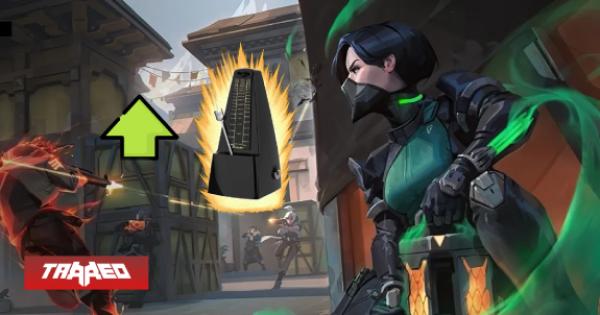 The competition in the shotter is absolute, Valorant As one of the most played competitive games currently, it supports its community by constantly improving its accuracy and skills. To improve users use different methods, either following advice, creating training routines or configuring the game in a different way, but for the better in Valorant, you only need a metronome.

You can read: High ELO bettors enter VALORANT pro or streamer qualifiers to ruin their games and bet against


A metronome is a 19th century tool that emits a sound continuously at a defined interval of time. Commonly used in music to practice the speed at which you play the notes and in Valorant its function is quite similar, but with the result of using one of the most precise and powerful weapons in the game. in the most efficient way possible, according to 3D Games. Its effectiveness is such that users are already testing this method on the Valorant subreddit.

It is the Guardian semi-automatic rifle, well, to use it in the best way we must respect its Recovery timesince this way the game will understand that we are not pressing the trigger several times in a row, but rather will count the shots as if it were the first. That is why the metronome is the best ally, because the recovery time of the Guardian is always the same, therefore it has its own rhythm and if we find it, it is only necessary to use the tool to follow it.

so our brain will be adapted to press the button at constant intervals in a natural way, improving your game and accuracy. So, you know, you just have to go to practice mode with your metronome or some Youtube video with a similar function and get the most out of the Guardian.