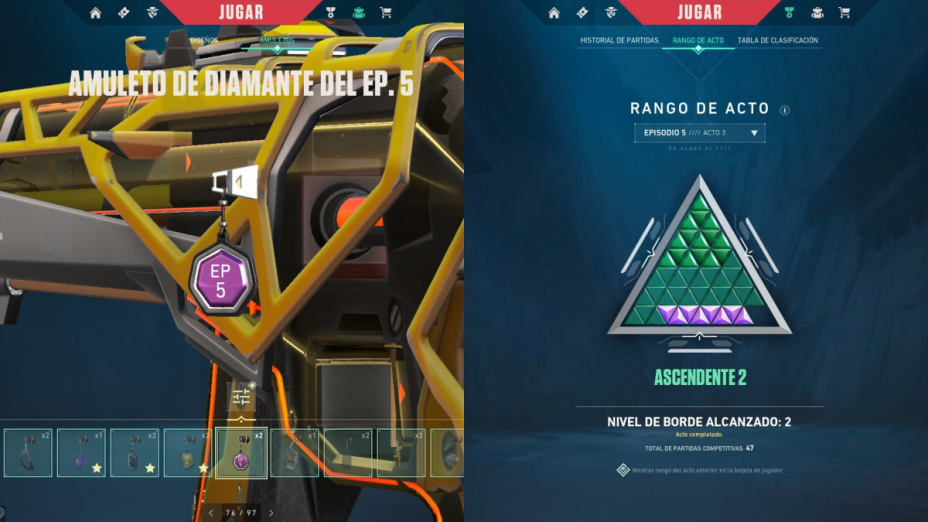 Valorant: Riot’s problems to give the final charms of Episode 5

Valorant landed in January with a new Episode in which you will have to fight on the various maps of the shooter for trying to rank up or at least stay in the rank you have achieved throughout the various acts that an Episode has on the server.

When an Episode ends, Riot gifts you with an amulet of your highest rank and you can equip it on your weapon to “show off” or show the same to your rivals when you play against them and you have one of these on two of the weapons in your inventory. However, Riot has not managed to distribute this well, and it is that many users complain that they have been given charms of lower ranks than those they have achieved.

The company is already aware of these problems and in their Riot Support account they have published the following: “We are aware that some charms from Episode 5 have not arrived or are not of the correct rank. Our specialists are working to solve it as soon as possible. Thank you very much for your patience!”

The rankeds are being a real Russian roulette

📢 [VALORANT – Gun Buddy/amuleto] 🔫
We are aware that some charms from Episode 5 have not arrived or are not of the correct rank. Our specialists are working to resolve it as soon as possible.
Thank you very much for your patience!

The beginnings of the Episode are one of the most complicated and the games are usually a jungle. Elo reset causes players of various ranks to match upand with it players of many different elos throughout the last act, can converge on the same lobby, generating a certain imbalance and several games being practically chosen from that selection of agents.

A selection of agents that have taken over duelists, and it is that many users are taking these agents thinking that it will be the easiest way to raise rating and in some cases they do not manage to generate the impact that this type of player is asked for. Over the next few days this situation will gradually stabilize, and with it the ranks of the vast majority of users who are part of Valorant.